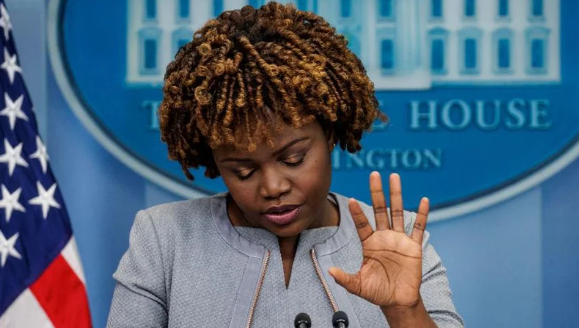 Karine Jean-Pierre, the press secretary for the White House, utterly disregarded a reporter’s query on Monday that raised issues with her account of President Joe Biden’s coal plant mistake.

By pledging to close every coal plant in America, Biden sparked controversy on Friday.

“So it’s going to become a wind generation. And all they’re doing is it’s going to save them a hell of a lot of money and using the same transmission line that they transmitted the coal-fired electric on. We’re going to be shutting these plants down all across America and having wind and solar power,” Biden stated.

Later, the White House attempted to contain the damage by stating that Biden’s statements had been misinterpreted to imply a connotation that was not intended.

Several journalists questioned Jean-Pierre about the justification. She initially defended her assertion that Biden’s comments were misspoken by pointing out that the environment in which he spoke was noisy and difficult to hear.

However, the president was actually speaking into a microphone and there was no background noise when he made his commitment to shut down coal facilities.

The more straightforward query came from the second reporter, “If Biden’s words were twisted, who did the twisting?”

The press secretary responded by asserting that the comments were misrepresented due to the way they were distributed. According to Jean-Pierre, understanding what Biden meant would be made clear by reading the entire text of his statements. However, if you read the transcript, Biden actually stated that “we’re going to be shutting these coal plants down all across America because of the green energy transition.”

Finally, after Jean-Pierre gave RealClearPolitics reporter Philip Wegmann an update on her story, another reporter chimed in with Biden’s original comments, speculating as to how they might have been twisted to suggest something different from their intended meaning.

When Wegmann again questioned her about how the words could be distorted, Jean-Pierre chose to entirely ignore him and respond to another question.