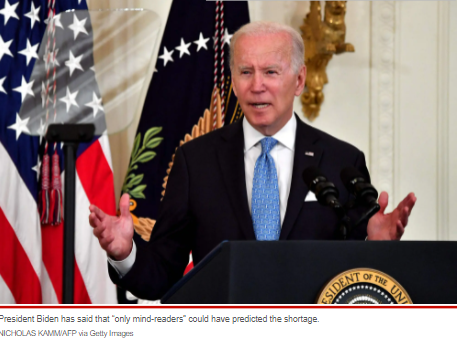 A White House economic advisor said Sunday that shutting down the Michigan facility at the center of the nation’s infant formula crisis was a wise decision, given foreign supplies of formula arriving in Indiana were destined for places in desperate need.

Despite an October whistleblower tip about safety risks at the Abbott factory in Sturgis, National Economic Council Director Brian Deese was grilled on Sunday news shows about how the government ended up so unprepared for the formula shortage.

The business was shut down by the Food and Drug Administration in February after a number of newborns were ill by formula prepared there.

The FDA did what it was supposed to do: review the safety of a facility in the United States and shut it down. And that was a wise decision in terms of safety. We’re working with newborns and infants. Safety must come first.

Meanwhile, as reported on Sunday, a Biden administration official said the first shipment of Swiss-made infant formula will be given to hospitals, doctors, home health-care centers, and pharmacies where the need is greatest.

According to the publication, the official, who was in Indianapolis to greet the shipment from the US airbase in Ramstein, Germany, claimed the Zurich, Switzerland-made formula is hypoallergenic and would be used to feed newborns who are intolerant of protein in cow’s milk.

Some cases are available for delivery in the next few days, according to a Nestlé spokeswoman at the Indianapolis airport. After regular quality testing, others will be released into the supply chain.

The shipment is the first in the Biden administration’s “Operation Fly Formula” to arrive in the United States this week.

Last Wednesday, the president invoked the Defense Production Act after his administration came under fire for failing to prepare for the shortfall and reports surfaced about worried parents with hungry children confronting empty store shelves. In their frantic hunt for formula, some people have driven for hours.