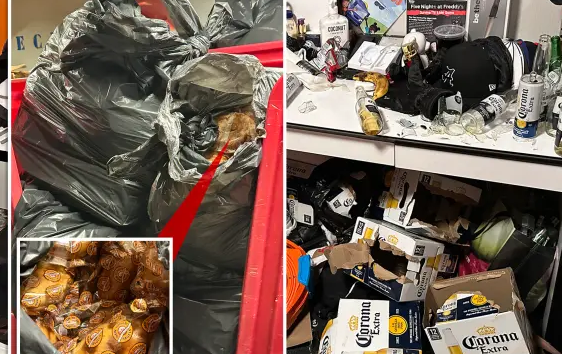 At the four-star Row NYC hotel in Times Square, where the city pays a daily rate as high as $500 a night, disturbing photos show garbage bags full with sandwiches and bagels waiting to be disposed of, according to hotel employee Felipe Rodriguez.

According to Rodriguez, other photos show a hotel room covered in empty beer cans and bottles during a raucous World Cup viewing party in November.

During the event, which took place in a room whose owner entrusted the key to a cousin while she was hanging out in the Bronx, a fight broke out over the match, leaving one man with a large knot on his head, according to Rodriguez.

During the celebrations on New Year’s Eve last week, Rodriguez claimed to have also recorded a little video clip of two female migrants fighting while pulling each other’s hair outside the hotel.

The 23-second smartphone video shows guys attempting to separate the women after they fell off the sidewalk and into the roadway while holding what appear to be beer cans.

On New Year’s Eve, an NYPD source who was working in Times Square corroborated the mayhem inside the hotel, stating there were shattered bottles all around the lobby, some partygoers were dancing, and others were passed out on the furniture and the floor.

Rodriguez, 57, claimed that since starting work at the 1,300-room hotel in 2017, when Mayor Eric Adams’ administration started using it as a “Humanitarian Response and Relief Center,” he has been startled by what has transpired.

Rodriguez added: “There have been times when we couldn’t take all of the garbage out because the bins were full, and I’m talking about 25, 30 bins of garbage. My problem is, why are we throwing away so much food? Someone from the city should have said, ‘Let’s order less food so we throw less food out.’ But nobody cares.”