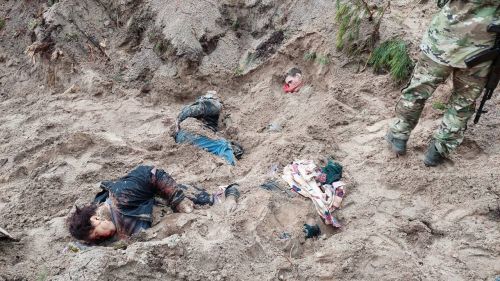 No one should be shocked. The goal of Russia was and remains to erase Ukrainian history, culture and all of its people.

Hundreds of bodies were discovered in alleys and cellars when Ukrainian troops advanced and Moscow’s forces retreated.

Despite being vastly outmanned, the Ukrainians have managed to halt Russian advances and have even begun counter-offensives in crucial areas of their country controlled by Putin’s henchmen.

1/2
Maria Genkin:
Pictures of some villages freed in Kyiv region, specifically Bucha, are devastating. Dead people lying outside of their houses, in what can only have been a “zachistka” – systemic execution of the men of each house. One body in front of every house. pic.twitter.com/6dQmp849tc

Some of the most heinous Russian war crimes in Ukraine have been documented all over the invasion map.

In the latter’s region, Ukrainian citizens have resisted the invasion in novel ways, including feeding poisoned pastries and counterfeit wine to Russian troops.

On Saturday, however, Ukrainian troops proceeded northeast of Kyiv to many towns and villages they had seized from the Russians, exposing some of the most terrifying sights in the Russian war.

Ukraine’s territory defense forces claimed that they uncovered the mangled bodies of 18 persons in a cellar.

Bucha massacre was deliberate. Russians aim to eliminate as many Ukrainians as they can. We must stop them and kick them out. I demand new devastating G7 sanctions NOW:

Women and children under the age of 14, some as young as 14, were among the victims.

The mayor of Bucha, Anatoly Fedoruk, declared on Saturday night that 280 bodies found lying on the street had to be buried in mass graves.

⚡️Zelensky reacts to photos of civilians killed by Russians in Bucha:

Many of victims murdered in cold blood by Russian assailants wore white bandages on their arms, indicating that they were unarmed and not Ukrainian fighters.

💬@ZelenskyyUa: Bucharest, NATO Summit Declaration. April 3, 14 years ago. There was a chance to prevent, so that 🇷🇺 didn’t come. Bucha, Kyiv region. Now. 🇷🇺 has come.

Putin’s army massacred entire families of migrants, including women, children, and grandmothers, according to Fedoruk, the town mayor.

It's not Putin. It's Russians.

Putin needs an international arrest warrant, according to a former top UN prosecutor who investigated genocide and war crimes in the former Yugoslavia and Rwanda, early Sunday.

What is happening in Bucha is genocide.

Taking every man 16-60 outside of his home, tying his hands and killing him in the street is genocide.

Raping women in front of their children, killing them and leaving them outside naked is genocide.

All of it is a threat of more.

This warrant must be carried out against Putin for the horrors committed in Ukraine on his command.

Thief Gets Wrecked When Trying to Steal Elderly Woman’s Purse