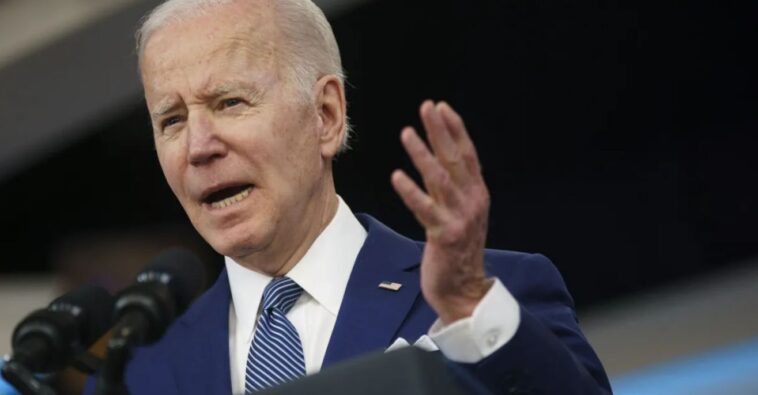 On Thursday, a spokesperson for the State Department stated that Russia was poised to unleash WMDs on Ukraine.


“A senior administration official confirmed for NBC News earlier today that the White House has assembled so-called tiger teams,” MSNBC’s Kristen Welker reported. “The New York Times is the first to report this. These are groups of national security officials who are making contingency plans in case Russia uses chemical, biological, or nuclear weapons as well as contingency plans for other possibilities.”

“The president said yesterday it’s a real threat, the possibility that Putin could use a nuclear weapon. How concerned is the administration that this could be imminent?” Welker asked of Ned Price, who was a former Spokesperson & Senior Director for the National Security Council under Obama.

“Well, we are concerned enough to plan for all contingencies, in part because, as I said before, this war is not going according to Vladimir Putin’s plans,” Price responded. “I think our nearest-term concern is the use, the potential use of chemical or biological weapons, and we’re concerned on that front for three primary reasons.”

“We know Russia’s track record. Russia has used these banned agents against their own people before, has supported the murderous Assad regime in its use of chemical weapons against the Syrian people,” Price went on. “Russia is engaging in what you might call projection, and that is to say that the Russians have a tendency to accuse others of what they have in mind. And we’ve certainly heard a lot of accusations, spurious accusations against Ukraine, against the United States, ludicrous accusations but it just undergirds our concern.”

“And then finally, we know, as I said before, that this war is not going according to plan for Vladimir Putin,” he continued. “His back is up against the wall in some ways. And so he is continuing to escalate. Our concern is that he will escalate in with chemical or biological weapons. We have been very clear, there will be a swift, strong response from the United States, from the international community were that to happen.”

Russia was threatened by President Biden that it would ” pay an extremely high price” for using chemical or biological weapons against Ukraine.

In March, Jake Sullivan, National Security Adviser, echoed Biden’s comments. He also suggested that Russia accusing the U.S. of using chemical weapons may be a “tell” they might be planning to conduct a ‘false Flag’ operation.

“It is a very legitimate concern, fear that Russia would use chemical weapons in Ukraine,” Sullivan said on CNN’s “State of the Union.”

“They’re right now accusing the United States and Ukrainians and potentially using chemical and biological weapons which is a tell, it’s a tell that they themselves may be preparing to do so, and then trying to pin the blame on someone else,” Sullivan argued.

It is fascinating that Price refers to the alleged use of chemical weapons by the Assad regime against the Syrian people. The Obama administration’s account regarding this alleged war crime is still up for debate.

“The head of the world’s chemical weapons watchdog has defended its conclusion that chlorine was used in an attack in Syria in April 2018, after a whistleblower alleged the report misrepresented some of the facts amid Russian claims that the watchdog is being politicized by the west,” the Guardian reported in November 2019.

The report said that WikiLeaks published an email sent by a member from the fact-finding group investigating the attack. It stated that the body was accused of altering the initial findings of investigators in order to make evidence of a chemical attack seem stronger.

“After the attack on 7 April 2018 in the suburb of Damascus, the US, France, and Britain launched missile attacks on suspected chemical weapons facilities run by President Bashar al Assad’s army,” the report added. “Russia and Assad have always denied a chemical attack occurred, saying it was probably staged by UK intelligence.”

“Alexander Shulgin, Russia’s ambassador to the Organisation for the Prohibition of Chemical Weapons (OPCW) at its annual forum in the Hague, said the official report into the attack was ‘distorting reality,” the report went on.

The OPCW director-general, Fernando Arias, defended the report: “[T]he nature of any thorough inquiry for individuals in a team to express subjective views. While some of these diverse views continue to circulate in some public discussion forums, I would like to reiterate that I stand by the independent, professional conclusion [of the investigation].”

This is relevant due to sparring accusations about the nature of a Biological Threat Reduction program in Ukraine that has been funded by the U.S. Department of Defense under the Nunn-Lugar framework.

Victoria Nuland (Under Secretary of State for Policy Affairs) expressed concern that biolabs might fall in the hands of Russians.

“Ukraine has biological research facilities, which in fact, we are now quite concerned,” Nuland said “Russian troops, Russian forces may be seeking to gain control of, so we are working with the Ukrainians on how they can prevent any of those research materials from falling into the hands of Russian forces.”

Ukraine had already issued a presidential order on February 24 to sterilize the facilities in the event of unforeseen military occupation, as documents obtained and exclusively translated by Becker News revealed.

According to documents, Ukraine had already issued a presidential directive on February 24, to sterilize facilities in case of an unforeseen military occupation. This was exclusively from Becker News.

Russia stated that it will use nuclear weapons only if its existence or security is at risk. Nearly 75 years of Cold War, post-Soviet behavior proves Russia’s inability to lie about this critical point.

“Trust but verify.” It is sadly not only a phrase Americans should invoke about the Russians but about their own government.

Biden’s SCOTUS Nominee Gets Stumped With One Brilliant Question