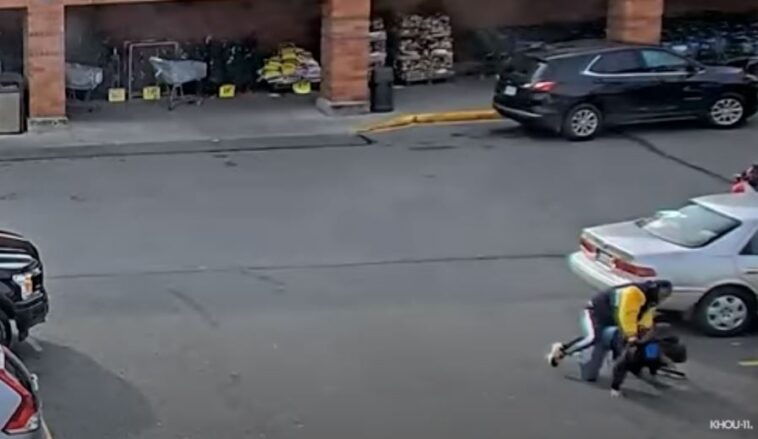 When a thug assaulted an elderly woman and attempted to snatch her purse in December of 2021, one man in Ohio recognized his moral duty to defend the weak and did so.

Pat Goins (the woman), Deshawn Pressley (the hero), and Scumbag Jones are the players in this scene (the scumbag). Pat Goins was out shopping, most likely for goods to bake cookies and gingerbread houses for her neighbors and church. That’s what all sweet old ladies do, you know. Scumbag Jones observed the 87-year-old alone and snatched his purse in an act of scumbaggery. Deshawn could hear Goins cry loud enough. Deshawn saw Goins cry and saw Jones fleeing with a pocketbook, so he put two and two together and pursued Jones.

This is where Pressley came up to Jones and easily body-slammed him to the ground, earning Deshawn a position in WWE’s new NIL program. Scumbag Jones was taken away by cops, who will hopefully inform his cellmates that he attempted to abuse an elderly woman. Pat Goins got the last word as Jones was being brought away. She’s not enraged by Scumbag Jones. She’s simply dissatisfied with him.

The victim said “I think I was a little hurt that he would do that. I pointed at him and said, ‘If you needed something, all you had to do was ask.’”

When they see someone in need, many Americans are more than willing to aid them. Ms. Goins was willing to help people who needed it. Deshawn Pressley was willing to put his life on the line to protect an elderly woman who was being assaulted by a robber.

Despite this, some people believe that the only way to achieve what they desire is to take it. They steal, assault, and attack, aiming to infringe on the rights of those who simply want to live their lives.

Thankfully, there are decent people out there, like Mr. Pressley, who will stand up for their neighbors and fellow citizens, even if it means taking a risk.

Ukrainians Are Poisoning Pastries And Giving Them To Russian Soldiers