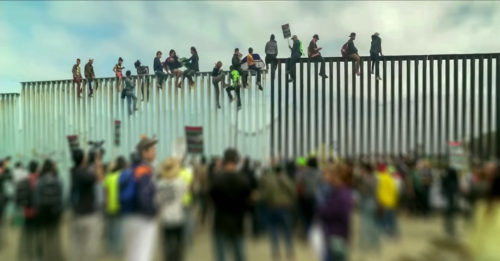 Speaking on CNN’s “State of the Union,” Adams noted Abbott and DeSantis are proliferating guns in the United States, which is a violation of fundamental human rights.

Adams also stated that Republican governors only expel their migrants to blue-city cities in order to cover up chronic human rights violations.

It was humbled to join the the Garner Way Foundation last night to honor the legacy and family of Eric Garner. pic.twitter.com/HVZJrVT9EA

DeSantis recently sent 50 illegal immigrants to Martha’s Vineyard in Massachusetts. This triggered congressional Democrats as well as the White House. Liberal lawmakers claim that DeSantis is engaging in human trafficking and that his actions are publicity stunts.

Fox News reported that Martha’s Vineyard’s self-declared humanitarian crisis is only 0.0025% of the overall border crisis.

Here Eric Adams. Here’s that cause of the problems you blamed border states for. Now go attack the administration responsible.
The Jaw-Dropping Number of Illegal Immigrant ‘Got Aways’ Under Biden’s Watch https://t.co/rNajUjaL1R

While trying to protect the reputation of the Biden administration, Adams claimed the whole country needs to coordinate in order to solve the issue of the migrant influx.

Adams said that America has always been open to all and should permit anyone who wants to live the American dream.

According to Jake Tapper of CNN, Adams’s comments mean he is urging the Biden administration to take the open border issues seriously; more than 1,700 illegal immigrants are coming to the US only from El Paso daily.

In a separate interview on ABC News on Sunday, Adams refused to back Vice President Kamala Harris over her recent claims the US southern border is safe and secure.

Adams argued that everyone should work together to secure the US’ southern border.

Adams replied that NYC has always been a refuge place because it has welcomed all who wish to achieve the American dream.