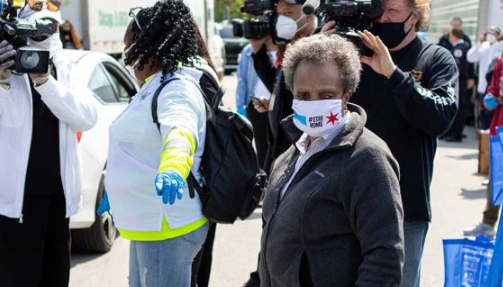 By listening to police scanners, journalists all throughout the nation can learn about crimes that are now taking place. With the help of the gadget, they may listen in on radio communication from first responders and law enforcement, allowing them the opportunity to identify major stories before official accounts of the events are formed.

The city of Chicago is taking steps to encrypt the radio broadcasts of its police force, making it hard for the media to learn about crimes as they happen. A coalition of organizations have spoken out in opposition to the decision, which has sparked fury in the media.

Democratic Chicago Mayor Lori Lightfoot defended the choice to start encrypting police transmissions on December 14. She stated that the choice was made for the officers’ protection. According to the mayor, open communication enables criminals to learn what the police are up to and change their criminal behavior in response to what they hear over the radio.

Media companies are up in arms. They have requested that the mayor reevaluate the proposal. A group of media outlets informed its readers in an open letter that the mayor intends to obstruct the transmission of Chicago Police scanners. They emphasized that the media and press have always had access to these communications, and that they are now spreading awareness of how the change will affect the neighborhood.

The press asserts that it cannot deliver timely, accurate, and perhaps life-saving news to its readers without access to the scanner feeds. The July 4th Highland Park parade shooting was used by the coalition to illustrate to its audiences times when it had assisted. Using the scanners, journalists warned the public about the danger, urging them to seek cover, stay safe, and assist in finding the missing.

A crime wave is sweeping the city. The city has strong restrictions governing firearms, so gun crimes are incredibly common. Under Lightfoot’s direction, there were more than 800 killings in 2021. The number of homicides at that time was the greatest in 25 years. Over 90% of the fatalities were due to gun violence.

The number of homicides is declining in 2022, but as at the time of this writing, there have been 667 murders in the city, or almost two each day.