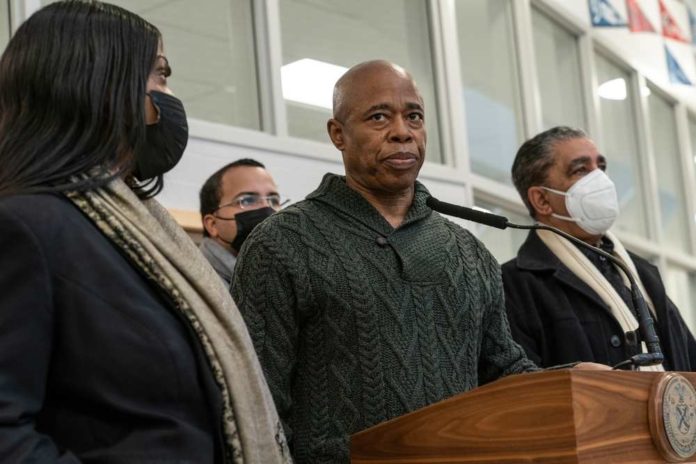 Eric Adams, the Democratic mayor of New York City, ran for office on the pledge to reduce crime in the city. Adams also made the assertion that his years of law enforcement experience had given him the know-how to reduce crime rates in order to garner votes.

Unfortunately, Adams didn’t keep his promise. In actuality, the mayor of New York City has shown a tremendous deal of contempt for the local law enforcement, despite the fact that he was formerly a police officer.

Join me at midnight tonight on @77WABCradio Look at this maniac! A man hurls a chair at an unsuspecting 66 year old man eating outside a Hell’s Kitchen pizzeria — and then grabs the victim’s phone. #crime #mentalillness #NewYorkCity pic.twitter.com/ewKSC7P9Hm

Adams allowed good New York Police Department officers to lose their jobs because to the city’s COVID-19 vaccine requirement. The Democratic mayor claimed that after these people were ejected, the city’s police force now had a chance to diversify.

Adams went on to declare a partial defunding of the police in the city budget a few weeks later. This has led to an increase in severe violence in New York City as a result.

Adams’ defunding and firing of police officers has given criminals more freedom than ever to cause mayhem.

Shut the f*ck up Eric Adams. ⁦@ericadamsfornyc⁩ The humanitarian crisis in Democrat controlled cities like his is from all of the crime, violence and disorder occurring on their streets, public transportation, and inside businesses on a daily basis. Get a clue. ⁦
⁦ pic.twitter.com/8HtI7WMlY5

The vicious assault of a customer at a nearby pizza business was caught on camera as proof of this. The elderly man was seen in the video eating alone while sitting down, just before he was struck in the face with a chair. The perpetrator also stole the man’s cell phone after this brutal assault.

The pizza business customer sought medical attention at the hospital after this happened. While the remnants of the NYPD try to find the attacker, he is still at large.

Theft, grand larceny, and burglaries have gone up under Mayor Adams’ oversight since last year. Locals should anticipate the neighborhood becoming even more unsafe as a result of the New York City mayor’s failure to effectively combat crime as he had promised.