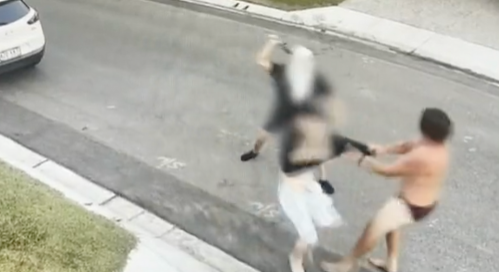 According to a report, an Australian guy who was only wearing underwear Monday morning successfully repelled a bunch of armed attackers using his bare hands.

The incident started about 4:30 in the morning. Steve Middleton discovered a young male suspect in his garage in the eastern city of Gold Coast, looking through his automobile.

According to the report, the teenage suspect attempted to flee the scene, but the naked homeowner made the decision to don some underwear and pursue him.

Not all heroes wear capes, in fact some just wear a pair of undies.

Steve Middleton was up early on Boxing Day when he spotted some thugs trying to steal from his car – the tradie decided to take matters into his own hands. #9News pic.twitter.com/ocg3s37W2f

“I was naked, found a pair of underpants, threw them on and ran outside. It was 4:30 a.m., and it was daylight. If it was dark, it could have been a different matter.”

But things didn’t end there; according to camera evidence, a group of young males were also using a baseball bat and a knife throughout the altercation.

According to the statement, Middleton and the group of young guys grappled before the suspects sped off in two different automobiles.

“I had another two fellas come at me with weapons and that was it. The young fella got away from me. All I wanted to do was hold onto one so we could get the police here and they could sort it from there,” Middleton is alleged to have said