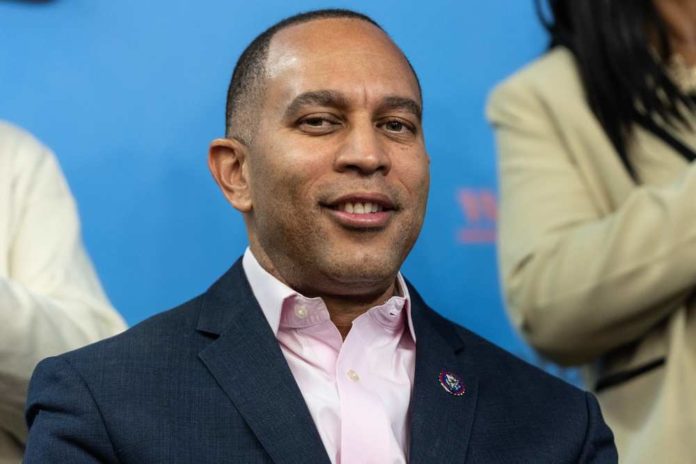 The new Republican House majority lost no time in stamping the 118th Congress with its pro-life stamp, and Democrats are furious. Rep. Hakeem Jeffries (D-NY) responded to two GOP bills with a shocking claim against the GOP.

He claimed that Republicans are aiming to “impose government-mandated pregnancies on the American people.”

For the record, the first of two new House resolutions denounced violent attacks on pro-life organizations and demanded an investigation into the crimes. Only three Democrats found it in their hearts to support this sensible legislation.

In other words, a newborn baby need medical attention. This is not a radical idea; it is basic human decency.

Republicans cited former Virginia Gov. Ralph Northam’s comments as evidence that the legislation needed to be updated to protect newborns who survive abortion procedures. The Democrats appeared to condone killing the survivors outside of their mothers’ wombs.

Republicans lined up to support safeguards for babies delivered alive, and the bill passed.

But Jeffries wasn’t having it.

The initiative to safeguard babies born alive was condemned by the House Minority Leader as an “extreme MAGA Republican right-wing agenda.” Jeffries attacked the GOP’s plans to “impose a nationwide ban on abortion” during his weekly press conference on Thursday.

Jeffries stated that the party will do “everything imaginable” to end abortion and referred to it as “that innate reproductive freedom.” He went on to say that Republicans want to “criminalize abortion care.”

Meanwhile, the new House majority has taken no steps in that direction, but that is irrelevant to Jeffries and his colleagues. Democrats care about demonizing Republicans, and 210 of them shamelessly voted against the law to protect newborns.

Rep. Henry Cuellar of Texas, a Democrat, voted in support of the bill, while Rep. Vicente Gonzalez of Texas voted “present.”

Republicans are correct in their appeal to protect the most vulnerable, and it is gratifying to see the new House majority prioritize this position. It also demonstrates how Democrats are horrified by any attempt to defend the unborn and newly born.