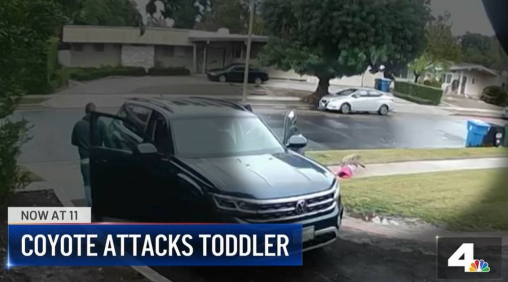 A coyote assaulted a father’s 2-year-old daughter on the family’s front lawn on Friday, leaving him facing a horrific predicament.

The girl was treated in the hospital for non-life-threatening injuries, according to the girl’s family, and she is now doing OK. A Rabies shot was also given to her because the coyote’s status was unclear.

The girl’s mother claims that one of the nasty scratches on her left leg is among many others.

Shira Eliyahou, the mother, stated that the coyote merely sort of dragged her, which is why her face is also somewhat damaged.

The youngster can be seen leaving her father’s SUV and heading toward the home as the violent coyote snatches her leg in the frightening scene, which was recorded by the family’s Ring alarm doorbell.

The father, Ariel Eliyahou, sees his fatherly instincts take over as he hurries to free his daughter from the coyote’s grasp that was pulling her along the sidewalk. Ariel helps his daughter stand up again while keeping a close eye on the dog that is now standing close by.

After unsuccessfully attempting to scare the animal away, Ariel grabs what looks to be a boulder and throws it, thereby scaring the coyote away and saving his daughter before carrying her inside the house.

Those by coyotes are extremely uncommon, and attacks that result in severe injuries are even more uncommon, according to the Humane Society.

“There have only been two recorded incidents in the United States and Canada of humans being killed by coyotes. One involved a child in Southern California in the 1980s and the other a 19-year old woman in Nova Scotia in 2009. These events, rare as they are, are serious and warrant serious response.”

They also mention that coyotes are not afraid of people, as evidenced by the coyote’s slow withdrawal from the adult male in the video up top.

This frequently occurs as a result of coyotes being fed by people or being close to people for an extended period of time, which raises the possibility of deadly confrontations like this.

Elon Musk FEARS for His Safety