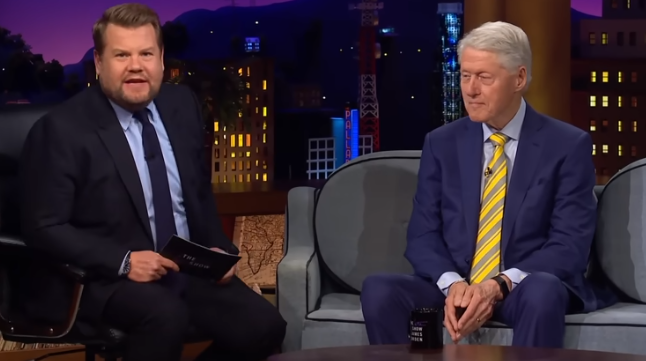 When Bill Clinton was president in the 1990s, he deployed federal officers to Nevada’s Area 51 to seek for aliens, according to James Corden of “The Late, Late Show”

“When I was president and I had a chief of staff, John Podesta, who loves science-fiction, we made every attempt to find out everything about Roswell. And we also sent people to Area 51 to make sure there were no aliens in the deep of it, because Area 51’s very important,” Clinton told Corden to laughter from the audience.

When questioned, “Who did you send?” Clinton grasped Corden’s hand and joked, “Oh, if I told you that” an apparent allusion to the secret intelligence joke, “If I tell you, I would have to kill you.”

“No, but I sent Sandy Berger, who passed away, sadly, a couple of years ago, who was my national security adviser,” Clinton added, his tone somber once again.

“But I said, ‘We’ve got to figure out how we’re going to deal with this,’ because that’s where we do a lot of our invisibility research in terms of technology — like how do we fly planes that don’t get picked up by radar and stuff like that.”

“So that’s why they’re so secretive, but there’s no aliens as I know.”

Clinton was questioned about recent congressional examinations of UAPs (unidentified aerial phenomena), which included tales of US Navy personnel scooping up items that defied human knowledge of science and movement.

As the audience chuckled, Clinton answered, “First of all, that’s a legitimate question now,  The short answer, but not the most meaningful one, is I don’t know about this.”

“And these are people who spend their lives doing this,” Clinton added. “He stated that we believe it is extremely unlikely that there is no life.”

“There are a billion solar light systems, not billions of planets. There are many secrets in the world.”

Hundreds Of British Troops Have Been Barred From NATO Deployment