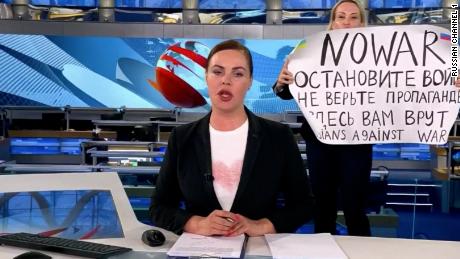 Ovsyannikova disrupted a live broadcast on Channel One, Russia’s most popular television network, by stepping onto the stage and waving a sign protesting the war in Ukraine. Ovsyannikova is a network editor, according to reports.

A woman burst onto Russia’s main live evening newscast today with a sign that says:

And chanting: “Stop the war! No to war!”pic.twitter.com/pKVKZFVEM3

“Stop the war, no to war,” the woman screamed, holding a sign that read “NO WAR” and “Russians against war” in English and “Stop the war! Don’t believe propaganda! They are lying to you!” in Russian.

The anchor who Ovsyannikova disturbed raised her voice in an attempt to drown out Ovsyannikova’s protestations, and producers immediately moved away from the live shot.

Ovsyannikova filmed a video outlining her motivation for speaking out against Putin and his war, saying she is ashamed of her role as a journalist in spreading Kremlin propaganda.

What is going on in Ukraine is a heinous crime. And Russia is the aggressor in this situation. And, according to a transcript of the video, guilt for this violence falls on the conscience of a single man: Vladimir Putin.

Marina Ovsyannikova, the woman who ran onto a live state TV news broadcast, even recorded a message beforehand. In it, she says her father is Ukrainian. She calls for anti-war protests, says she’s ashamed about working for Kremlin propaganda, and she denounces the war absolutely. pic.twitter.com/nOpUY9bH74

She went on to remark “My father is Ukrainian, and my mother is Russian; they’ve never been enemies, and the necklace I’m wearing is a sign of the fact that Russia must cease this fratricidal conflict as soon as possible, and our fraternal peoples can still make peace.

Unfortunately, I’ve spent much of the last few years working for Channel One, spreading Kremlin propaganda, and I’m deeply ashamed of it. I’m ashamed that I allowed lies to come from the television screen, that I allowed the zombification of Russians, and that we were silent in 2014 when it all began.”

She is said to have been charged with putting on an unlawful public event.

Despite this, Ovsyannikova and other Russian journalists who oppose the war might face lengthy prison sentences after Russian lawmakers enacted a legislation criminalizing fake news earlier this month. Fake news is defined as anything that opposes the Kremlin’s narrative. Journalists can face up to 15 years in prison under the statute.

Biden Gives Most Absurd Explanation of Inflation Ever

Russian Mcdonald’s Fan Chains Himself To Eatery To Prevent Closing