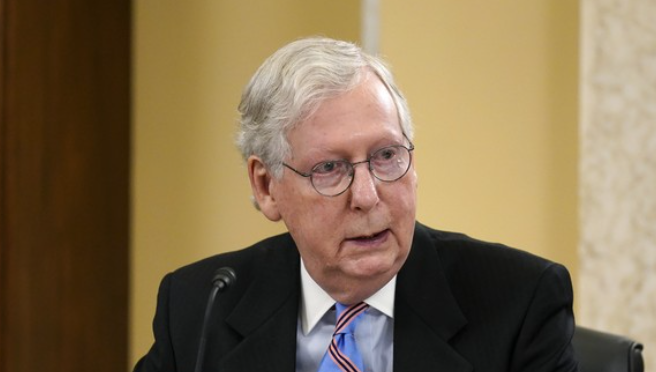 Senate Minority Leader Mitch McConnell is leading the charge among Republicans who are outraged by the action and see it as a swindle.

Biden is encouraging students to take out as much debt as they want–they'll never have to pay it back.

What a terrible message to send to young Americans.

“President Biden’s student loan socialism is a slap in the face to every family who sacrificed to save for college, every graduate who paid their debt, and every American who chose a certain career path or volunteered to serve in our Armed Forces in order to avoid taking on debt. This policy is astonishingly unfair. The median American with student loans already has a significantly higher income than the median American overall. Experts who studied similar past proposals found that the overwhelming benefit of student loan socialism flows to higher-earning Americans. Democrats specifically wrote this policy to make sure that people earning six figures would benefit,” Wednesday saw a statement from McConnell in reaction to the action.

Transferring rich lawyers' debt to poor Americans should put to rest the narrative that Scranton Joe cares about the working class.

“President Biden’s inflation is crushing working families, and his answer is to give away even more government money to elites with higher salaries. Democrats are literally using working Americans’ money to try to buy themselves some enthusiasm from their political base.”

Sad to see what’s being done to bribe the voters. Biden's student loan forgiveness plan may win Democrats some votes, but it fuels inflation, foots taxpayers with other people’s financial obligations, is unfair to those who paid their own way & creates irresponsible expectations.

Republican Senator Ben Sasse stated, “The President can spin it however he wants with Pell window dressing, but at the end of the day his debt forgiveness scheme forces blue-collar workers to subsidize white-collar graduate students. Instead of demanding accountability from an underperforming higher education sector that pushes so many young Americans into massive debt, the Administration’s unilateral plan baptizes a broken system. This deeply regressive action — which fails even to acknowledge that most debt is held by folks with graduate degrees — will do nothing to jumpstart the reform higher education desperately needs.”