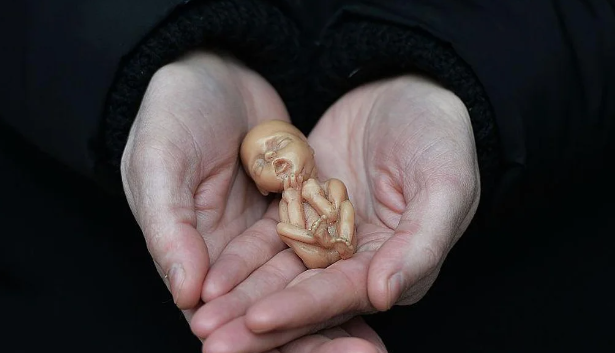 In Portland, Oregon, a pro-life billboard was defaced with the stunning words “KILL THEM KIDS.”

In addition to the disgusting language, the eyes of the baby depicted on the placard were covered with xs. The billboard had been defaced, and pictures of it had been released online by the group ProLife Across America.

Based on the photographs, it appears that a phone number and the name and logo of the pro-life organization were also defaced on the sign, which stated “PROTECT THE BABIES” and “HEARTBEAT 18 DAYS from conception.”

An anti-abortion billboard was taken down in NE Portland this morning after it was vandalized with the message: "Kill them kids."
More: https://t.co/P7YP7WmLv1 pic.twitter.com/s5NAi0m3s4

According to David Spivey, manager of Outfront Media Operations, the defaced sign was taken down on January 2 in the early morning. According to the caption on a picture of the billboard, the sign was still discernible at 9:30 am on the same day.  Director of ProLife Across America Mary Ann Kuharski reportedly wrote in an email saying the organization planned to change out the billboard.

“PROLIFE Across AMERICA is a non-profit, non-political, 501 (c)3 organization dedicated to changing hearts and saving babies’ lives. We are committed to bringing positive, persuasive messages, offering information and alternatives – including adoption – and post-abortion assistance to those in need. PROLIFE Across AMERICA’s mission since 1989 has been to reach out through billboard, radio, print, and online ads to people who may not be reached in any other way. Our ads create an ‘Atmosphere of Life’ in a ‘culture of death,” based on the organization’s website.

Desantis Declares State Of Emergency, Calls For Activation Of Florida National Guard Due To Influx Of ‘Unauthorized Aliens’