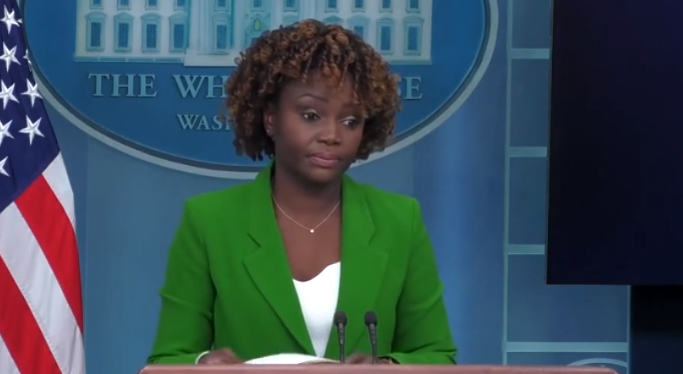 White House press secretary Karine Jean-Pierre was questioned by Daily Caller White House Correspondent Diana Glebova about where illegal immigrants should be transferred if not to Democratic towns.

In light of the White House’s criticism of Republican governors that moved the migrants to liberal towns, Glebova questioned the press secretary during Wednesday’s briefing on where illegal immigrants should be relocated.

“You’ve condemned governors sending migrants to various cities across the country, but where should officials who are overwhelmed by the number of migrants coming into their cities and into their shelters, where should they send the migrants?” Glebova questioned.

KJP answered, “We have said many times before, there’s a process, a legal process, and that we are willing to work with cities who are dealing with this issue. What we have seen from governors is that they are using migrants as a political tool. That’s not the way to do it. And they’re sending migrants, as we’ve seen the last several months, the last several weeks, they’re sending migrants without letting city officials know, without letting the federal government know.”

She continued by saying that they arrange for television news crews to attend in order to record the event and utilize it as a political gimmick. They will thus continue to criticize it, but they are also ready and willing to cooperate with cities that are addressing the problems.

In which Jean-Pierre responded, “I don’t even understand that question. I will move on.”

Republican governors have received repeated criticism from the White House. Given that the Biden administration intended to reverse Title 42, Greg Abbott of Texas, Doug Ducey of Arizona, and Ron DeSantis of Florida were criticized for sending migrants to liberal places, particularly New York City and Washington, D.C.

In September, DeSantis sent two planes filled with around 50 willing migrants to Martha’s Vineyard, Massachusetts, to start the process of relocating people out of Florida. In October, the governor declared his intention to send more migrants to Delaware, the state where Biden was born, and Illinois.