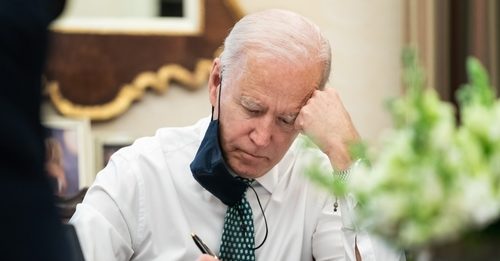 Republicans have formally declared their opposition to widespread, illegal immigration by standing up and saying so.

The White House has been blatantly lying about how secure the southern border is for months on end, insisting it is when it is not, and ignoring government professionals who say it is out of control and has to be controlled.

States are rising up to the task as a result of the Biden administration’s inaction and lack of urgency. This entails putting up physical obstacles at the border, apprehending people who enter the nation unlawfully, and even transporting them to sanctuary towns.

.@JacquiHeinrich: Is there anything the Biden Admin can do to prevent Governors from sending buses of migrants to the states of their choice?

KJP: We should call this out, and call it a political stunt.

Biden showed no concern when undocumented immigrants occupied border communities in Texas and Arizona. The president is currently furious, though, because Republican governors dared send these migrants to Martha’s Vineyard and other sanctuary areas.

Biden criticized Republican governors for not allowing their areas to be entirely overrun with illegal immigrants during a speech at the Hispanic Caucus Institute Gala.

According to the president, Republican governors are engaging in political pranks and impeding efforts by the White House to ensure proper migrant control at the border.

Joe Biden got lost again after finishing a speech at the 45th annual Congressional Hispanic Caucus Institute gala in DC.

This is the THIRD time in one week that Biden has finished short remarks on a stage he walked onto just minutes before and then appeared completely lost. pic.twitter.com/qU2JBcVp8T

The fact that border states have been dealing with illegal immigration for more than a year, unfortunately, demonstrates otherwise.

The number of migrants entering sanctuary cities like Chicago and Washington, DC, as well as Martha’s Vineyard, is actually quite small compared to the regular influx of migrants that border cities see.

Naturally, Biden also called for amnesty during his remarks at the event, and he encouraged Republicans to accept this. On this particular issue, the president shouldn’t hold his breath.

The United States is currently experiencing issues at the border because of this encouragement of illegal immigration.

The need for these transfers can be eliminated if the White House is as serious as it claims to be about migrants not being sent to sanctuary communities and Martha’s Vineyard.

That, of course, means protecting the southern border and halting massive illegal immigration. The fact that Biden hasn’t mentioned doing this and has instead spoken about amnesty shows that Democrats simply don’t understand it.