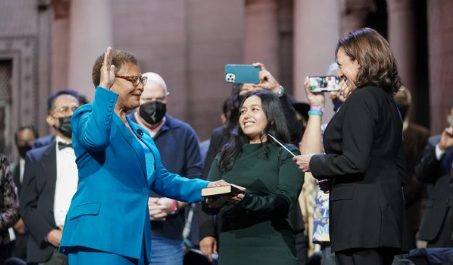 At Sunday’s inauguration, Democratic Los Angeles Mayor Karen Bass announced that she will declare a state of emergency on homelessness and establish an Office of Community Safety.

I had the privilege of swearing in Karen Bass as mayor of Los Angeles. I've seen her commitment to public service up close in Congress, and I know she will serve the people of this great city with honor. Congratulations, Mayor Bass. pic.twitter.com/mgrONndfI7

She said “Some neighborhoods have asked for additional officers, but what neighborhoods are asking for and what they need for safety is as diverse as our city is. That’s why my administration will launch an Office of Community Safety so that we can meet with neighbors, store clerks, dog walkers, teenagers who know what’s actually going on behind the statistics. We want to have block by block information on how to truly keep each neighborhood safe – is it more officers, better lighting, cleaner streets, a closed alley that you need?”

According to the Los Angeles Homeless Services Authority’s 2022 Homeless Count, there were an estimated 69,114 homeless persons residing in Los Angeles County in February, which is around 4.1% more than in 2020. According to police figures, the city’s year-to-date violent crime surged by around 1.9% by December 3 over the previous year and by roughly 9.3% over 20.

According to reports, one of Bass’ daughters was a victim of a hit-and-run on December 1 in Los Angeles. When Bass defeated real estate mogul and former Republican Rick Caruso in the November mayoral race, she was running for the 37th Congressional District of California.