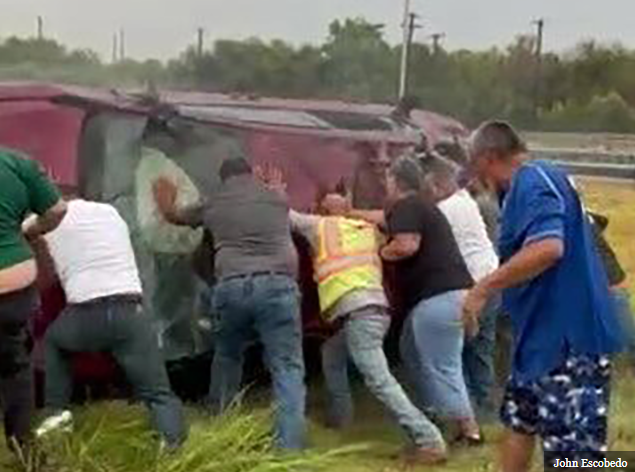 On Monday in San Antonio, Texas, a group of concerned locals banded together to save a driver from a perilous position.

At around 8:00 am, the group was seen turning an upside-down car right side up near Loop 410 and Moursound Boulevard.

John Escobedo, who claimed to have seen the driver lose control, captured the incident on video. Escobedo called neighbors when the automobile overheated, and the rescue effort got under way.

The footage captures numerous people attempting to flip the automobile back onto its wheels in the rain. Other cars and trucks passed by on the adjoining road while the action played out in a median.

The crew realized they had to save the person remaining in the driver’s seat once the automobile was on its right side.

“Break it, break it!” one man was seen carrying what looked to be a tool, someone in the background of the camera shouted.

A short while later, a man in a white shirt seized the tool and slammed it against the car window in an attempt to smash the glass and free the driver.

“Pull him out, pull him out!” screamed the person hiding behind the camera. The others quickly opened the door and could be seen caring to the person inside.

They were trying to assist the motorist when the person behind the camera said, “Make sure he’s not injured.”

Escobedo claims that the driver was awake when help arrived from emergency personnel. The person’s condition wasn’t disclosed right away.

A similar incident happened recently when five football players from Rome High School in Georgia helped a woman after seeing a car accident close to their campus.

The young men sprinted over to the scene and pulled the woman from the car. After moving her to a secure location, they checked on the occupants of the other vehicle.

China To Send Troops To Russia For Joint Military Exercises