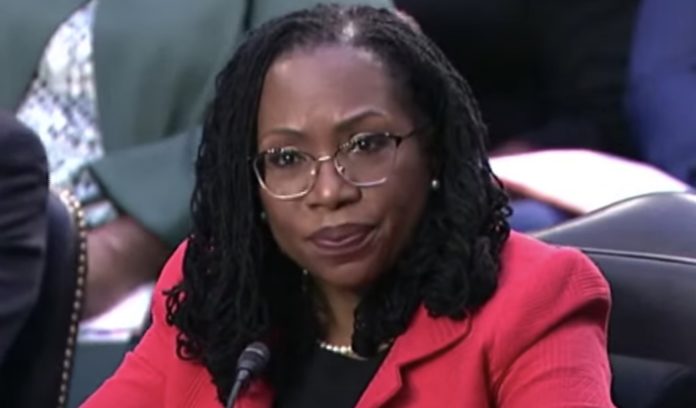 Judge Kentanji Brown Jackson, who was admittedly nominated by Joe Biden to the Supreme Court based on race, is facing major scrutiny as the Senate begins confirmation hearings.

Senator John Kennedy asked a simple question during the confirmation hearing about when constitutional protections of life begin.

Senator Kennedy asked, “When does life start? In your opinion?”

She responded in a stupendous manner, saying, “Senator… um…I don’t…know.” This was followed with an awkward, uneasy laugh.

“Do you have a belief?” Kennedy pressed further.

“I have, um, personal religious and otherwise beliefs that have nothing to do with the law in terms of when life begins,” Jackson responded.

“Do you have a personal belief though about when life begins?” Kennedy asked.

“I have a religious view that I set aside when I am ruling on cases,” Jackson said.

“When does equal protection of the laws attach to a human being?” he asked.

“Well Senator, um… I believe that the Supreme Court… um… actually I, I actually don’t know the answer to that question — I’m sorry — I don’t,” Judge Jackson responded.

Biden’s Supreme Court nominee cannot answer the simple question of when life begins or when equal protection of laws applies to a person. Many Americans may believe that she is not fit to serve on the Supreme Court because she refuses to answer basic questions about law.

KENNEDY: When does equal protection of the laws attach to a human being?

JACKSON: Well Senator, I believe that the Supreme Court — actually, I actually don’t know the answer to that question, I’m sorry. pic.twitter.com/sVbJFtH6N8

“Democrats today believe in racial discrimination,” Senator Ted Cruz responded to the nomination after Biden kept his promise to ignore merit and select a nominee based on race.

The former President Barack Obama did not pick the first black woman, as the majority of Americans were against this choice.

As confirmation hearings go on, Jackson’s judiciary record is under increasing scrutiny. Missouri Senator Josh Hawley says he noticed an alarming pattern in Judge Jackson’s treatment of sex offenders, particularly those that prey on children.

“This is a disturbing record for any judge, but especially one nominated to the highest court in the land,” Hawley noted in his thread of examples. “Protecting the most vulnerable shouldn’t be up for debate. Sending child predators to jail shouldn’t be controversial.”

Hawley put together a disturbing list of examples. He argues that this shows she “goes beyond ‘soft on crime” and shows “a record that endangers our children.” Take a look:

Here are some examples from Hawley: