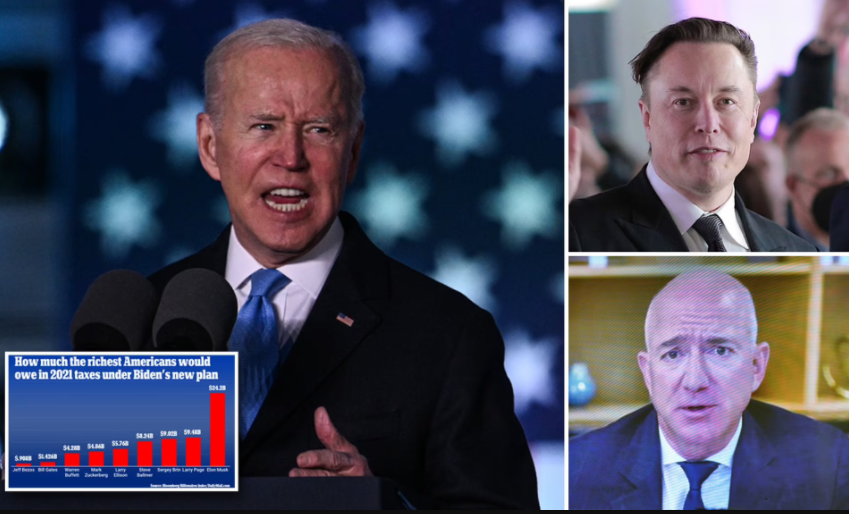 The White House plans to propose the ‘Billionaire Minimum Income Tax’ on Monday as part of Biden’s 2023 budget blueprint. However, it would have to be approved by Congress in order to become law, and it would almost certainly face heavy opposition from some quarters.

The idea tries to remove a rumored loophole that helps the country’s 700 billionaires, many of whom keep the majority of their money in stock, which is not taxed until it is liquidated for a gain.

The White House proposal would require billionaires to pay a tax rate of at least 20% on their overall income, which would include both traditional types of wage income and any unrealized gains, or the increase in stock value before it is sold.

Despite the fact that the proposed new tax would apply to all American households worth more than $100 million, the White House claims that the tax will raise the majority of new money from billionaires.

Since taking office, Biden has faced pressure from his party’s progressive wing to impose some kind of new tax on the ultra-rich, but the details of such a scheme have remained a mystery.

As the country’s inequality has expanded, proponents of a billionaires tax have pointed out that when unrealized stock gains are regarded as income, the richest Americans generally pay a far lower effective tax rate than middle-class workers.

Elon Musk and Jeff Bezos, two of the world’s richest individuals, have a large portion of their fortune in the form of stock.

They can finance luxurious lifestyles by taking out loans secured by their stock holdings when the value of their shares grows.

According to detractors, if billionaires are compelled to pay taxes on the rising value of their stocks before selling them for a profit, they may be forced to sell off ownership of firms they started to meet their tax obligations.

Billionaires who already pay more than 20% in federal taxes would not incur any additional taxes under Biden’s new plan.

Even AOC Turns on Biden