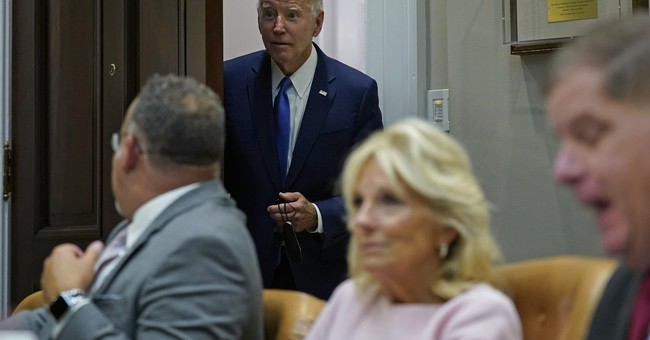 President Biden traveled briefly to the FEMA offices on Thursday to speak about the federal government’s response to Hurricane Ian and to meet with FEMA Administrator Deanne Criswell. As his FEMA head shouted after him to try and nudge him back in the right direction following his speech, Biden turned and sauntered away from the stage in the wrong direction.

He appeared to be looking for a way out, but was unable to find one, so he appeared to disregard Criswell and continued to stroll into a FEMA work area where he began shaking hands with workers.

Biden wanders away from the podium as FEMA Administrator Deanne Criswell attempts to lead him in another direction. pic.twitter.com/2G3OKlsog7

Even still, it wasn’t the first time this week that Biden had questioned his health.

President Joe Biden questioned where “Jackie” was many times while addressing the audience on Wednesday morning at a White House session on hunger, nutrition, and health. He was making reference to Republican Congresswoman Jackie Walorski, who died along with two staff members earlier this year in an automobile accident.

Biden wanders away from the podium as FEMA Administrator Deanne Criswell attempts to lead him in another direction. pic.twitter.com/2G3OKlsog7

In an August statement, Biden expressed his public sorrow at Rep. Walorski’s passing. A video tribute to Walorski was shown at the occasion. Additionally, Biden just authorized the renaming of an Indiana VA. facility after Walorski, but it seems that none of those experiences affected him sufficiently to stop him from looking through the throng for the late congresswoman.

When Biden finished speaking at a gathering last week, he moved away from the microphone and proceeded to the side of the stage where there were no steps or an exit for him. On the other side of the platform, a speaker complimented him for his “outstanding” job while he stood there, hidden in the shadows.

And those are only the most recent examples that cast doubt on Biden’s mental capacity and general fitness for office. Biden has appeared to deviate from the script on numerous occasions during important speeches, including the time he said Putin couldn’t hold onto power while delivering a speech in Eastern Europe and the numerous times he contradicted American policy toward Taiwan by stating that the United States would fight China if it invaded.

In order to judge if he is qualified to serve as President of the United States, Biden advised us to observe him. The evidence suggests that the answer is a devastating no.