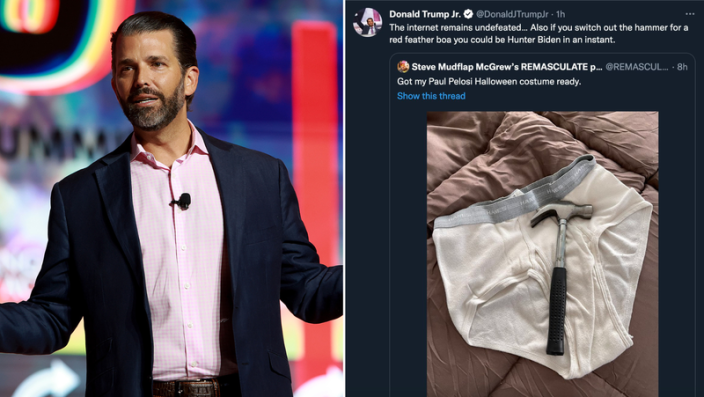 Paul Pelosi, the husband of Speaker Nancy Pelosi, was the victim of a violent home invasion attack last week. Donald Trump Jr. posted a number of images and remarks on Twitter and Instagram mocking the incident.

Former President Trump’s eldest child, the executive vice president of the Trump Organization, retweeted a photo on Sunday of a piece of underwear and a hammer that was captioned: “Got my Paul Pelosi Halloween costume ready.”

“The internet remains undefeated… Also if you switch out the hammer for a red feather boa you could be Hunter Biden in an instant,” Donald Trump Jr. wrote.

Paul Pelosi, 82, was attacked early Friday morning by an assailant who was reportedly shouting “Where is Nancy?” when he broke into their California home.

When the police came, they discovered the attacker arguing with Paul Pelosi over a hammer before starting to beat him.

Paul Pelosi’s operation to repair a skull fracture was successful, and he is expected to recover.

Republicans have condemned the attack as political violence, with former President Trump calling it “a terrible event” on Monday.

Members of both parties have called for an end to political violence in the wake of the attack.