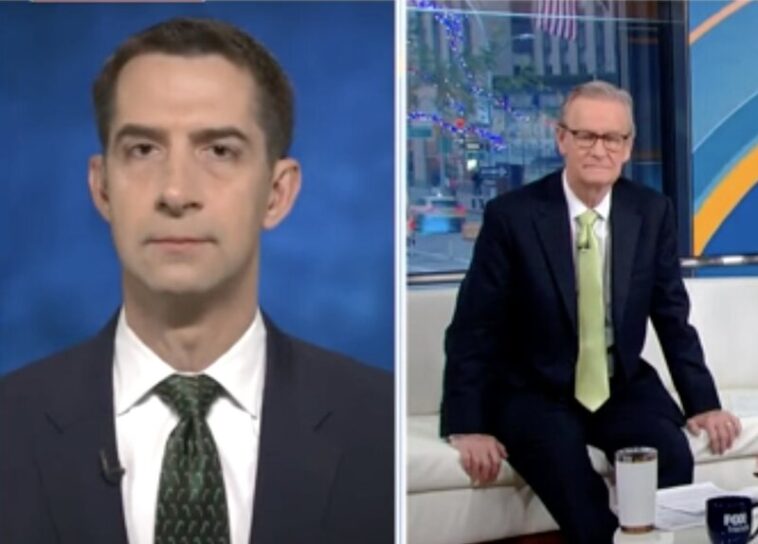 “What President Biden did over the weekend is a typical half-measure that reflects the incompetence of this administration,” Cotton stated to Brian Kilmeade.

“If you want to implement a travel ban, it needs to go into effect immediately, that’s what most European nations did, they implemented this travel ban. If you don’t want to implement a travel ban because you think the virus is already here or that it’s counterproductive then you shouldn’t do so, but this is yet another incompetent half-measure. Last January when the Democrats were wasting the American people ’s time with the impeachment trial of President Trump I was trying to sound the alarm about this virus calling for President Trump to stop travel immediately from China to the United States. After about a week, President Trump did so and I remember then that Joe Biden and Kamala Harris denounced their xenophobic and racist just like they called subsequent travel bans on other countries racist as well. The hypocrisy here is amazing but it’s very typical of what you get from this incompetent administration.”

Steve Doocy added: “And to your point, if you’re going to do a travel ban, do it quickly. Dr. Fauci, on Wednesday, when the travel bans went into effect around the world in a number of country, he said yeah, it’s something we’re going to think about. It wasn’t for five days until they, we, the United States actually did it, although now, the w. h. o. is saying don’t impose travel bans just because, but ultimately, you can blame tony now for this because if you’re going to do it do it fast.”

Cotton responded, “Steve, the lessons of this pandemic which I said last January at beginning of the pandemic is that you must move early and move fast if your measures are to be implemented.”

“That if you wait until every bit of evidence is in, you will have waited too long. As Benjamin Franklin said an ounce of prevention is worth a pound of cure. Now is it possible this new variant is already in the United States? Yes it is possible. It’s in other places like Portugal or the United Kingdom however there’s a difference between having a few people exposed to it and having plane loads of people landing from Wuhan as the Democrats would have had early last year. This is just, again, another example of the astonishing hypocrisy of the Democrats regarding this virus.”

Fox & Friends then played a clip in which Dr. Tony Fauci said that Ted Cruz should have an investigation over January 6. Cotton laughed in response.

“Well, so first off, no bureaucrat like Tony Fauci should be engaged in a partisan battle back and forth with an elected member of the United States Senate,” Cotton began.

“Ted Cruz, like 99 other senators represent the people who elected him. That bureaucrat, like Tony Fauci , works for those people. Second. Tony Fauci lied to Congress and he should be investigated. He repeatedly said that his agency did not fund dangerous and risky gain of function research in those Wuhan labs, which almost certainly was the origin of this virus. He said it repeatedly to Congress. His agency just admitted a few weeks ago that yes, they did, in fact, fund gain of function research, so there’s a lie there it’s either Tony Fauci lying to Congress or his agency after months of stonewalling, writing a letter to Congress and admitting it. I suspect it’s Tony Fauci lying on the spot in his testimony to Congress. He put the American people at risk by funding this dangerous research, which was happening under the Obama administration, which he thought he knew better than the people’s elected representatives. It’s just another example of how these bureaucrats think that they are the science, that they represent the epitome of knowledge and those politicians, like the president of the United States, and the United States senators and representatives, have no business telling them what to do. That’s not the way our democracy functions,” Cotton said.

For the complete exchange, watch the video above.