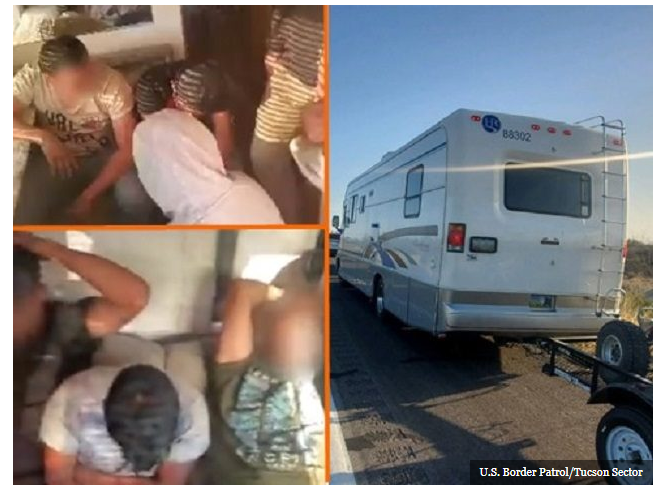 Human traffickers had crammed 29 migrants into a motor home for passage over the desert near the Mexico border, according to Tucson Sector Border Patrol authorities.

A juvenile U.S. citizen and eight migrants were arrested near Sierra Vista, AZ, after being stopped by Brian A. Terry Station agents. Five migrants were concealed under a #TonneauCover with no means of escape.

Agents from Arizona’s Sonoita and Wilcox Border Patrol Stations collaborated to intercept a huge motor home suspected of transporting migrants across the border into the United States. According to a tweet from Tucson Sector Chief Patrol Agent John R. Modlin on Monday, numerous occupants exited the car and attempted to run into the desert as the agents approached.

More than 20 migrants were still inside the RV when the agents arrived. A search of the region resulted in the detention of 29 migrants. The footage shows a group of primarily single adult migrants crammed into the motorhome shoulder to shoulder.

In collaboration, Sonoita and Willcox Stations stopped the RV south of Benson, AZ, and spotted several individuals attempting to flee into the desert. More than 20 migrants were discovered inside, and 29 total were arrested. #HonorFirst pic.twitter.com/Q73PibFRgd

A phony back license plate appears to be on the Holiday Rambler mobile home. The recreational vehicle and towed ATV’s fate was not revealed by officials.

During their attempts to transport migrants into the United States’ interior, human traffickers routinely place them in life-threatening circumstances.

Agents from the Brian Terry Border Patrol station discovered a group of migrants imprisoned in the bed of a pickup truck near Sierra Vista, Arizona, over the weekend. The agents apprehended the driver, a minor American citizen, according to Chief Modlin.

El Paso Sector officers working in New Mexico rescued seven migrants who had been stranded after being abandoned by their human traffickers during a one-week period last month.

A group of 40 migrants was discovered imprisoned inside huge metal crates placed onto a flatbed trailer by Rio Grande Valley Sector agents in South Texas. At the Falfurrias Border Patrol checkpoint, a K-9 unit spotted a shipment of smuggled migrants. The only source of fresh air in the box was a 166-inch vent.

Agents discovered 38 hot migrants imprisoned inside a tractor-trailer compartment in West Texas’ Big Bend Sector. The find was made near Santa Teresa, New Mexico, at the Interstate 10 immigration crossing.