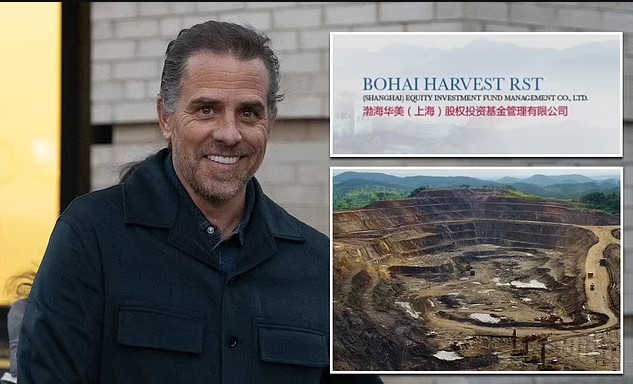 Hunter Biden, long before the Biden administration was formed, helped to grease the wheels of a Chinese company to acquire key rare-earth mineral components used in electric vehicle batteries.

Saturday, the New York Times reported that Hunter Biden was part of an investment company that was involved in the $3.8 billion purchase by a Chinese conglomerate of one of the largest cobalt deposits worldwide in the Democratic Republic of Congo.

The House passed Biden’s spending bill on Friday night. It will give tax credits of $320 billion to companies and consumers who purchase electric cars, solar panels or invest into improving the energy efficiency in their buildings.

China’s dominance in the production of batteries for electric vehicles is largely due to China’s cobalt mines. The Democrats and the Build Back Better plan are effectively hoisting American taxpayer dollars and subsidies on behalf of the American people.

The Times reports that Biden was a founding member of BHR (Bohai Harvest RST, Shanghai) Equity Investment Fund Management Company. It was established in 2013, while Joe Biden was Vice President in the former White House.

Three Americans including Hunter Biden controlled 30% of BHR, while the rest is owned or controlled by Chinese investors, including Bank of China, the Times reported from Chinese regulators’ records.

BHR assisted in financing an Australian coal-mining operation controlled by a Chinese state-owned company. It also helped a subsidiary of a Chinese defense conglomerate to purchase a Michigan auto parts manufacturer.

One of the most profitable investments was the 2016 acquisition and subsequent sale of CATL, which is a Chinese company that has been a global leader in the production of electric vehicle batteries. This was Joe Biden’s final year as Obama’s vice-president.

China Molybdenum, a Chinese mining company, also paid $2.65 Billion to purchase Tenke Fungurume from American company Freeport McMoRan. China Molybdenum was looking for a partner to purchase a small stake in the mine. Lundin Mining of Canada was Canada’s choice.

Hunter Biden’s BHR did so for China Molybdenum with $1.14 billion – which came entirely from Chinese state-backed companies – signing an add-on agreement that allowed China Molybdenum to buy BHR’s share, according to the Times.

China Molybdenum did this in 2019, when Hunter Biden, through Skaneateles LLC, controlled 10% of the company, which is a Washington, D.C.-based company, according to the report.

A White House spokesperson said that the president wasn’t aware of the son’s connections to the deal when asked by The Times.

Chris Clark, Hunter Biden’s lawyer, stated to the Times that his client no longer has any interest in BHR or Skaneateles.

Chinese records have removed Hunter Biden (BHR) from the board of directors as of April 2020. This was right around the time that his father became the Democrat’s presidential candidate against former President Donald Trump. He was fighting the COVID-19 pandemic in Wuhan, China.

The Times asked Hunter Biden and current BHR executives for their comments.

“We don’t know Hunter Biden, nor are we aware of his involvement in BHR,” China Molybdenum spokesman Vincent Zhou wrote in an email to the Times.