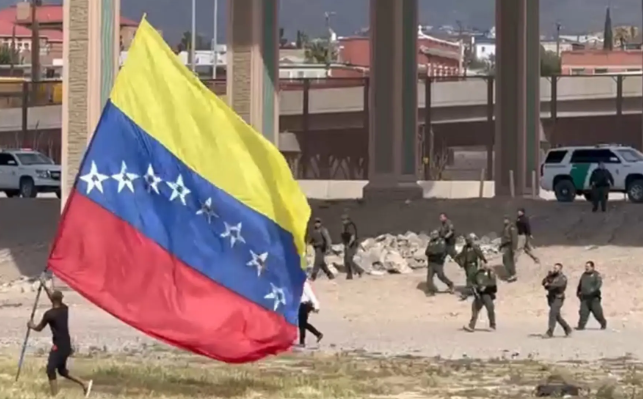 A shocking new video of a violent encounter between migrants and US border patrol agents in El Paso, Texas, has surfaced. The feds opened fire with pepper balls after one officer was hit with a rock and another was attacked with a flagpole.

El Paso Times video shows Border Patrol officers approaching the group of people illegally crossing the Rio Grande on Monday, among whom was a man carrying a huge Venezuelan flag.

One migrant pokes the flagpole at the federal authorities as they create a line along the border to drive the marauding mob back to Mexico.

According to Landon Hutchens, a spokesman for the Border Patrol, the group of Venezuelans attempted to enter the US illegally as they were protesting near the river.

He added that the throng dispersed and returned to Mexico at around 1:20 pm ET after the less dangerous pepper balls, which discharge an irritant to the eyes, nose, and throat, were fired.

The extent of the agents’ injuries was not disclosed by Hutchens.

The Office of Professional Responsibility at Customs and Border Protection will investigate the event, according to the statement.

A group of migrants had marched in Juarez, which is across the border from El Paso, calling for a chance to cross the border, before the chaotic altercation on Monday.

On October 13, the Biden administration implemented Title 42, a pandemic action to eject immigrants from the US to Venezuelans if they entered the US unlawfully at the Southern border, in response to a sharp rise in migration from that country.

While Mexico has agreed to return Venezuelans who enter the US illegally over land, the administration has agreed to admit up to 24,000 migrants from Venezuela via American airports.

In the fiscal year 2022, a record 189,000 Venezuelans crossed the southern border of the US as they left the nation’s crumbling economy and unpredictable political structure.

Since then, 1,800 Venezuelans have been sent back to Mexico, where they now find themselves homeless in Juárez, the city’s sister city in Mexico.

While they wait for another opportunity to enter the US, ejected migrants have begun gathering on the Mexican side of the border and building a tent city.

The incident in El Paso was the subject of a request for information from the American government, according to Roberto Velasco, Mexico’s director for North American affairs, in a tweet on Monday.

The American Civil Liberties Union’s Jonathan Blazer, director of border strategies, described the video of the border confrontation as quite frightening.