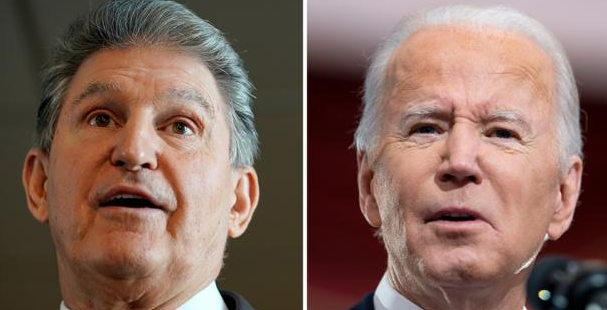 The decisions Joe Biden continues to make on energy are disturbing to many Americans.

Biden continues to block domestic oil extraction even as gas prices are rising. The president is criticizing the oil industry for not increasing drilling while still blocking it.

Biden is obstructing leases, land, and other opportunities that are essential to ensuring American energy independence. The president also bragged about closing coal plants all around the nation, which was yet another disrespect to the American people.

This led to some serious pushback from Sen. Joe Manchin, as The Hill reports.

Manchin Gives Biden a Piece of His Mind
The West Virginia Democrat claims that Biden’s remarks on shutting down coal facilities are out of touch with where Americans are at this time. The majority of people are experiencing severe financial challenges, and the rising cost of energy isn’t helping.

My statement on comments President Biden made about shutting down coal plants: pic.twitter.com/LEeqrGdwqm

This is especially important in light of the economy’s volatility and the rising number of layoffs occurring amid inflation.

Towards the end of his statement, Manchin warned that if Biden proceeds with energy policy in the way he’s been discussing, prices are only going to keep on rising.

Par For the Course For Biden
It’s difficult to recall an instance in which the president genuinely refrained from saying something offensive. Although the remarks about coal plants truly take the disconnect to an entirely different level.

Biden obviously knew what he was talking about and meant every word he said, despite the White House’s later attempts to downplay what he said.

The White House omitted to include the fact that Biden’s remarks about closing coal facilities stretch back to 2019.

Biden’s staff now claims his words were “twisted” — but they weren’t.

Biden has repeatedly called for ENDING the coal industry.

Wanting to take out coal plants is all the more reason why Biden cannot have another two years of Congress backing him. The House and Senate need to be swiftly taken away from Democrats and restored to a GOP majority.

Only then will the Republican Party truly have a level playing field to push back against the disastrous policies that Joe Biden and his administration have planned.

If the president keeps destroying the energy sector of our country, there won’t be any left in no time, and only the extremely wealthy would be able to heat their homes.

Dem Voter Accused Of Voting In Multiple States Since 2014

Could US Be Gearing Up For War – Inside Official Speaks Out