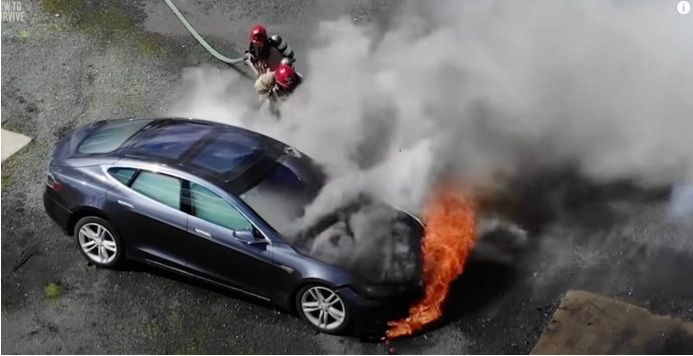 When an unexpected fire broke out in an electric car, the driver was traveling close to the A55.

The man in the car was quickly assisted by bystanders and paramedics.

According to reports, the Welsh Ambulance Service took the man to the hospital with severe, potentially fatal wounds.

The Emergency Medical Retrieval and Transfer Service was present, and there was a helicopter at the accident site.

Crews remained at the scene until Tuesday, according to North Wales Police Chief Inspector Alwyn Williams, because the implicated car was an electric vehicle.

Another EV fire… this one from Florida earlier this summer. A Jaguar i-pace was parked in an attached garage when the owner heard "popping" sounds and saw smoke puffing from the car. The car was moved outside before it burst into flames. I guess you can call them "lucky". pic.twitter.com/JUOwthCSb4

Gonzalo Salazar reported yet another fire that involved his 2019 Jaguar I-Pace electric vehicle. Two years after he purchased the vehicle, it caught fire in his garage.

He plugged his car in at night as usual and drove it the next day for about 12 miles before coming home and putting it in his garage.

He noted smoke and declared, “My thought immediately was, ‘When there is smoke, there is fire,’ and I need to get the car out of the garage.”

He claimed to have first contacted Jaguar roadside assistance, “When I ended the conversation with them, there were more pops, but this time it was followed by fire from under the car. I then called 911 to come help with the situation. But this was not a slow burn, once the fire started, there were multiple pops, and the car was just engulfed in flames rapidly.”

According to reports, Salazar’s Jaguar I-Pace is the fourth one to mysteriously catch fire.

In the end, the fire fully consumed the majority of the car. Only a little piece of the car’s front was still undamaged in photos taken after the fire was put out.

US Gathering Intel on NKorea Amid Potential Nuke Test