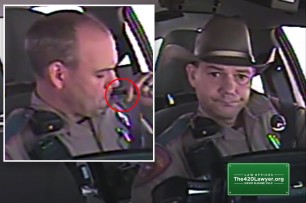 According to newly leaked evidence, a demoted Texas trooper was captured on his police cruiser’s own dash cam inhaling confiscated marijuana.

The video was taken in 2019, but it was only recently discovered after a lawyer representing multiple drivers who were stopped by the same state trooper in Wichita Falls sought evidence against him.

According to the footage, Chad Harden, a former trooper with the Texas Department of Public Safety, was captured on camera consuming marijuana from a vaping pen he’d just taken from a suspect.

Harden was suspended in June 2019 after the Texas Rangers launched an investigation into him, and he resigned three months later, according to the local Times Record News. It wasn’t immediately clear whether the vaping video was related to the investigation.

However, the ex-cop was eventually charged with tampering with evidence and agreed to a plea agreement in August, receiving two years of probation, according to the site.

Meanwhile, Sloane announced that his clients’ marijuana possession charges had been dropped. He said that none of them were participating in the vaping video.

A number of other criminal cases involving Harden’s testimony have also been dismissed.

US Denies Submarine Was In Russian Waters As Moscow Claims