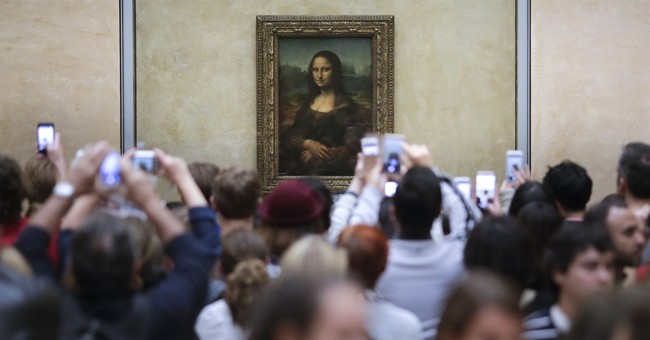 On Sunday, a guy costumed as an elderly woman in a wheelchair attacked the Mona Lisa at the Louvre, all in the cause of climate change.

According to surveillance evidence, the 36-year-old guy attempted to assault the glass case while wearing a wig and lipstick, and then smeared cake all over it.

As he was being escorted away by security, he explained why he did it to museum visitors.

Maybe this is just nuts to me💀but an man dressed as an old lady jumps out of a wheel chair and attempted to smash the bullet proof glass of the Mona Lisa. Then proceeds to smear cake on the glass, and throws roses everywhere all before being tackled by security. 😂??? pic.twitter.com/OFXdx9eWcM

“Consider the Earth!” There are others that wish to destroy the planet! ” he said. ” he explained. This is why I did it.”

Everything took place at the Louvre Museum in Paris. A man disguised as an old lady in a wheelchair sprang to his feet, removed his wig, and hurled a slice of cake at the Leonardo da Vinci masterpiece.

Because the painting was covered with glass and who knows what else, no harm was done to it, but it was certainly a spectacle.

The person appealed to the crowd to think about planet Earth while flinging the desert. Because it was laced with cream, the stain was obvious. He also placed flowers within the display.

Destruction "for a good cause" is still destruction. Every tyrant in history will tell you they were trying to do good. Everyone thinks their cause is just. We can't let this kind of thing go unpunished. There is a lot we shouldn't let go unpunished.

Employees at the Louvre quickly cleaned off the smear on the window. According to accounts, the vandal was taken away for psychiatric therapy.

Various assaults have been made against Renaissance paintings from the 16th century. In 1911, a Louvre employee stole it. It was badly damaged by sulfuric acid in the 1950s and has since been protected by bulletproof glass.

The culprit had gotten close to the artwork by pretending to be disabled, allowing them to take advantage of a provision that allows those with mobility challenges to see all of the exhibition’s important items.

Before being turned over to the police, the suspect was seized and removed by reception and surveillance officers. The Louvre Museum has filed a complaint.