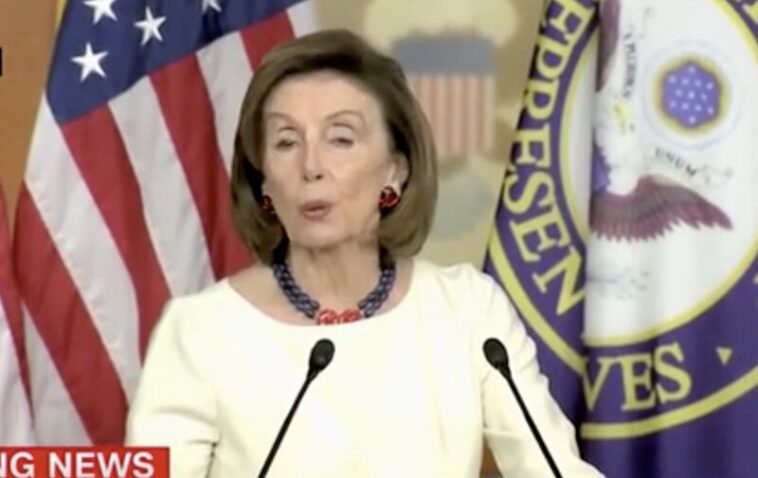 Nancy Pelosi was dumb on Thursday when she was asked about Tuesday’s election night massacre that Democrats suffered.

“Each election is different,” she started with. “As you know, I was former party chair and I always know, let’s look down into the numbers and see what it is. But I do think as the American people learn more about what we are doing in this legislation, for families, for children, for women in the workforce to save our planet and the rest it will be very positive. You can’t deny that it would be very positive.”

A reporter asked – “Do you think — do you think Democrats were penalized for having not gotten these things done?”

“I — again, I haven’t seen all of the analysis, and I know from my own experience that as I’ve said to you before, the plural of anecdote is not data. Let’s see what the data is as it comes out. But there’s no question. I’m heartbroken because Terry McAuliffe is a great leader in our country and was a great governor of — of Virginia, and I hoped that he was a once and future governor. But also, we’re all interested in down-ballot races as well. So I haven’t seen much of that. New Jersey, a nice victory. I spoke to the governor this morning to congratulate him. And again, we’ll be working together to build back better. But without saying what impact it had, it’s always a positive message to have results that are understood by the public,” Pelosi continued to add.

Pelosi SHOULD panic. Dinesh Daousa outlined just how dire this was for Democrats.

“While the education issue was front and center, the critical issue in Virginia, this was a kind of stop the insanity message to the Democratic Party across the board. I mean, the Democratic Party has a razor thin margin in the house and the Senate, but they’re governing like this is FDR, like they own the country,” he stated on Fox News.

“And so I think this is a push back against the insanity going on at so many different levels. Now, politically, this is, I think, such a devastating loss. I’m trying to sort of put it in perspective. It reminds me a little bit of the loss of the two Georgia Senate seats of the Republicans right after 2020,” he continued to say.

You can watch the entire segment below.

“But in the case of that Georgia election, you know, there was a divide between the Trump MAGA kind and the Republican establishment in Georgia. But here the Democrats were united, Obama was there, Kamala Harris was there, Stacey Abrams. I mean, they pulled out all the stops and even so they suffered not what just looks to be a defeat but a resounding defeat and I think that has implications for 2022 and perhaps stretching all the way to 2024,” Dinesh concluded.

Stunning Victory in Texas Spells Doom for Democrats in 2022