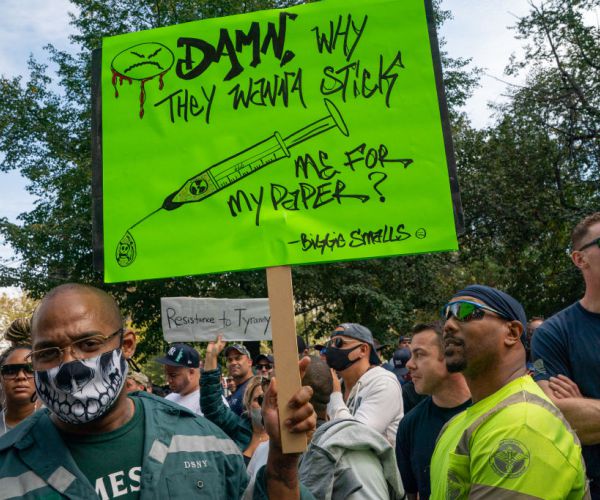 On Monday, thousands marched along the Brooklyn Bridge in protest of New York City’s vaccination mandate. This could result in thousands of people being fired without pay.

Many of those who marched in “March for Choice” stated that they weren’t against vaccines but opposed the mandate, according to CBS2 New York.

“This is not ‘following the science,’ this is like totalitarianism,” retired FDNY Lt. James Finnegan told the news outlet.

“He doesn’t remember that when it started a year-and-a-half ago, we worked through it all. Ok? I got my family sick,” Finnegan added.

This mandate requires that approximately 160,000 city workers get at least one shot of vaccine before Friday to avoid being on unpaid leave.

Sofia Medina (firefighter) decried the mandates after the protest reached city hall. “Now, [after] working in numerous emergencies — Hurricane Sandy and the snowstorms… I am under threat. According to the New York Post, Medina stated that we are at risk of losing our livelihoods for simply choosing to protect our bodies.”

De Blasio released a statement Monday defending the mandate and pointing out that contingency plans had been in place to avoid interruptions in services.

“Every commissioner and their team has talked through different options. Obviously,” de Blasio says, “use of overtime is an example. I talked to all of the relevant commissioners in the lead up, especially the most crucial operational agencies, and every one of them said they were confident this is the right thing to do.”