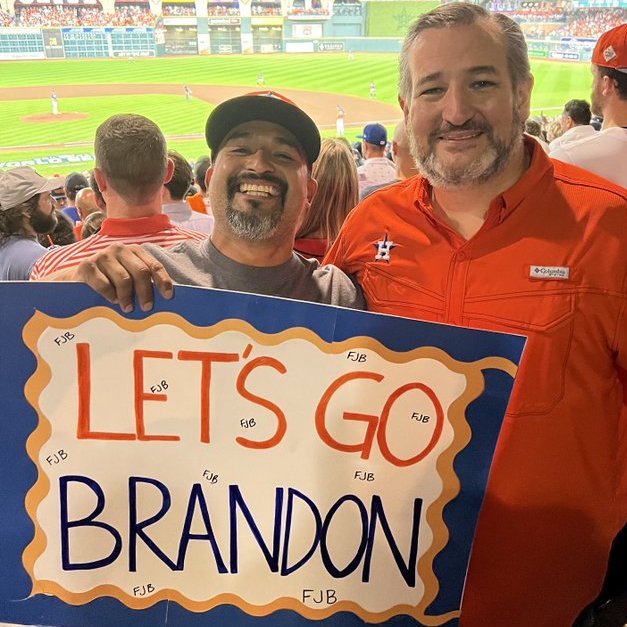 Sen. Ted Cruz (R-Texas), shared a photo of himself at Game 2 of the World Series with a man who was holding a “Let’s Go Brandon” poster.

Awesome time at game 2 of the #WorldSeries

After a NBC reporter incorrectly reported that NASCAR fans were chanting “Let’s Go Brandon” after a win by Brandon Brown, the chant became an internet hit. In reality, they were shouting, “F**k Joe Biden!”

Cruz smiles next to the man who holds the sign. It also has the letters FJB scrawled multiple times.

ICYMI: @SenTedCruz (R-Texas) tweeted a photo of him at Game 2 of the World Series w/a man holding a “Let’s Go Brandon” poster. What's the big deal…& who is Brandon? READ MORE HERE:https://t.co/4Sru7JWcjj pic.twitter.com/N1anrOkfCr

According to the Washington Examiner, those initials are an apparent reference of the chant “F**k Joe Biden”.

The Washington Post had to correct a story about the Biden chant at the September Save America rally, Georgia. It claimed that the crowd was singing “Let’s Go Brandon.”

Many on Twitter called the Post out for promoting anti-president sentiment in order to protect President Biden. They noted that the “Let’s go Brandon” chant was not created by the media until October.

Houston won 7-2 in Wednesday’s game to tie the series with Atlanta Braves at one.

Cruz tweeted: “Awesome experience at #WorldSeries game 2. It was a great win! It was a much better result than the last. #Astros IN SIX.

Fauci Under Fire By Beagle Organization Over Alleged Puppy Experiments