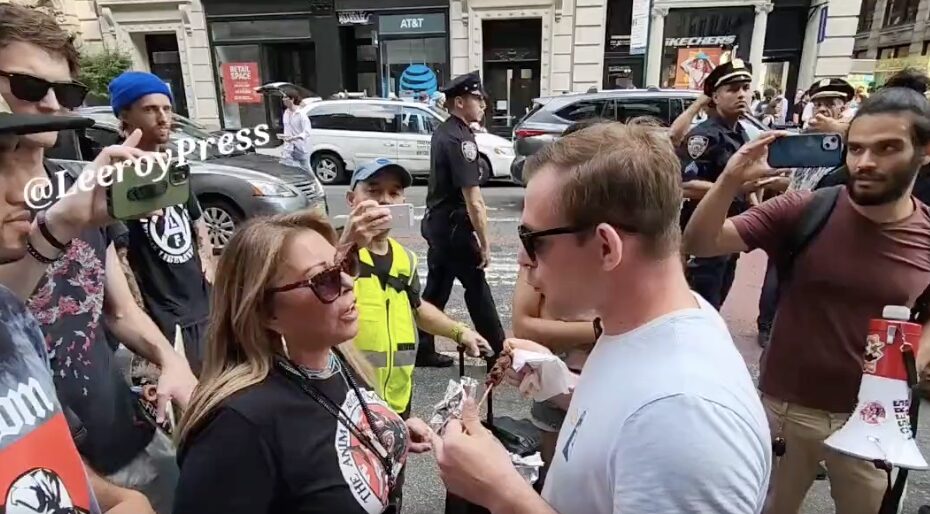 This past weekend in New York, a guy demonstrated the power of quiet by embarrassing a bunch of extreme vegan protesters in Manhattan.

In the viral video above, a guy calmly eats a meat kebab in front of a Nike store while glaring down the irate protesters.

We can see this man enrage the activists, who seem quite wild in their interactions with him, thanks to the Twitter account @viralnewsNYC.

“You’re disgusting, who do you think you are? You’re just a coward,” the lady snarls at the towering, unmoved man.

In front of Nike in #NYC where animal rights activists were rallying in front. A man comes off the streets and starts mocking the activists and eats Shushka Bob in front of the activists. Activists start yelling at the man#pita #animals pic.twitter.com/puQ1I9EJlV

The antagonist added, “You’re a f***ing coward, you’re a cowardly piece of sh*t, and you’re humiliating yourself. “What am I going to do? Nothing. You’re going to die on your own.”

As our first woman moves aside in what seems to be a diluted effort at a good-cop-bad-cop routine, the insaneness intensifies even more.

Before continuing to enjoy his meaty dinner, the mystery man starts licking his kebab, which is welcomed with amusement from spectators and pure wrath from his accuser.

At the end of the video, a whistle can be heard in the distance, which is probably coming from one of the police officers who monitored the demonstration and tried to disperse this conflict.

The man eating the kebab stayed silent the whole time the video was being recorded, unfazed by the madness happening in front of him. He just kept eating.

This video, which according to the tweet above has gotten 1.7 million views, has undoubtedly tarnished the vegan movement since the protesters’ attempts to demean the man and his privates for choosing to consume an already-dead animal were perceived as irrational and impolite.