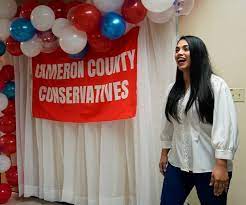 A recent house party close to the U.S.–Mexico border saw the Democratic candidate for Congress Rochelle Garza talk about schools, taxes, immigration, and the conversion of an old railway line to a hiking trail.

The one thing that was not mentioned Friday night, over Corona beers or Domino’s deep-dish pizza, was the efforts of Democrats in Washington to use a huge federal spending package to combat climate change.

“It’s not that the district is more moderate or moderately more conservative,” stated Garza, 36, an immigration lawyer running for the House seat held by retiring centrist Democrat Filemon Vela. “Talking about how you’re going to meaningfully impact families, and make healthier families and healthier communities, I think that matters to people a lot more than some of these hot button issues.”

As part of the massive spending package that they are trying to force through Congress, Democrats in the United States are set to spend more on the environment than ever before. President Joe Biden has traveled across the country announcing the alarm. He blames a warming planet and warns of a “code Red for humanity”.

However, this focus could lead to political problems in areas that are energy-rich. This includes South Texas where many Latino voters voted against Democrats last year’s election. Regaining their support could be crucial to the party’s chances of holding Congress in 2022.

“They’re really making it easy on us,” stated Mayra Flores, a 35-year-old respiratory care practitioner and organizer for Donald Trump’s 2020 presidential campaign. Flores is also running for Vela’s seat and argues that Democrats are forcing Texans to choose between their energy sector jobs and curbing climate change.

According to the Pew Research Center, Trump won 38% last year from the national Latino vote. This is 10 percentage points more than in 2016. His most impressive gains were in areas that are heavily Hispanic and produce large quantities of oil and natural gas, such as the district Garza & Flores wish to represent.

It runs from Brownsville, which has plans to build liquified gas terminals for export. It then stretches more than 150 miles (240 km) north to sparsely populated parts of the hydraulic-fracturing-dependent Eagle Ford Shale.

“We are very dependent on oil and gas. That’s the reason you saw those numbers,” said Flores, who was born in Mexico, came to the United State at age 6 and picked cotton every summer growing up after age 12. “That’s what people do. That’s where they work.”

Biden signed an executive order to stop new oil and gas leases on federal territory. However, it was stopped by a court order this Summer.

However, the spending package currently being discussed in Congress aims to accelerate efforts to combat climate change. It contains language about imposing high polluter fees and tax incentives for clean and electric vehicles, as well as new requirements that the nation’s electricity grid be more dependent on renewable energy sources.

Rolando Lozano (62 years old) is a manager at an electric utility. He was among 200 people who recently filled Harlingen’s community center west of Brownsville to see Flores, and other Latino Republican candidate candidates. He stated that Democrats have moved to the left so much it “looks anti-American.”

“It’s almost blatantly in the citizens’ face,” Lozano stated. “You can call it by any other name, but, fundamentally, it looks wrong.”

However, this feeling is not universal among Hispanics. A September Associated Press-NORC Center for Public Affairs Research Poll found that 58% of Hispanics approve of Biden’s handling of climate change. 38% disagree.

Amanda Dave is a Brownsville public health community campaign manager. Her father was an oil and gas worker. She believes that protecting the environment is more important than appeasing energy interests.

Still, Gabriel Sanchez, executive director of the University of New Mexico’s Center for Social Policy, said threats of climate change traditionally poll as more pressing concerns among Latinos than the population at large — unless they are presented in terms of job losses. He said that in Texas, New Mexico, Colorado and other energy producing states, “you’ve had tension for awhile.”

“Latinos are extremely conscious on climate change and support dang near every progressive policy there is to curb it,” Sanchez said. “But you juxtapose that with potential loss of jobs, that’s when you start to see a much more even attitude split.”

The potential clashes between environmental changes and energy jobs could also impact the neighboring House district. Vicente Gonzalez, a Democratic Representative and founder of the House Oil and Gas Caucus, was reelected in 2020 by less than three percentage points. Fast-growing Texas is gaining two new congressional seats after the 2020 census, and the Republican-controlled Legislature has proposed redistricting maps making Gonzalez’s territory more red.

During last year’s final presidential debate, Biden promised to “transition” the country away from fossil fuels. Torres Small responded that it was wrong to “demonize” the energy industry and decried the idea of banning fracking, but still lost.

“I see this rise in the Republican Party,” said Flores, who campaigns under the slogan “Make America Godly Again.” “People are going to go vote to get their jobs back.”

Garza believes that climate change-fighting efforts could create high-paying jobs. He points out that the district has already built wind farms and could have more opportunities for solar power.

“These are natural resources that we can easily take advantage of to create jobs,” said Garza. Amid the Trump administration’s previous crackdown on immigration, she would approach groups of immigrants waiting on bridges between Mexico and the U.S. and provide presentations on asylum seekers rights.

“I think it’s about focusing on the opportunities that we have,” Garza said of national Democrats’ environmental push. “Republicans like to preach doom.”

Daniel Canales, 33 years old, is currently between jobs and attended the Harlingen conservatives’ event. He said that he and others don’t object to new, more sustainable jobs but struggle with Democrats’ ideology.

“The problem is the Democrats seem to be too urban-oriented. They’re too fixated on problems where they live,” Canales said. “Out here, that doesn’t mean much.”