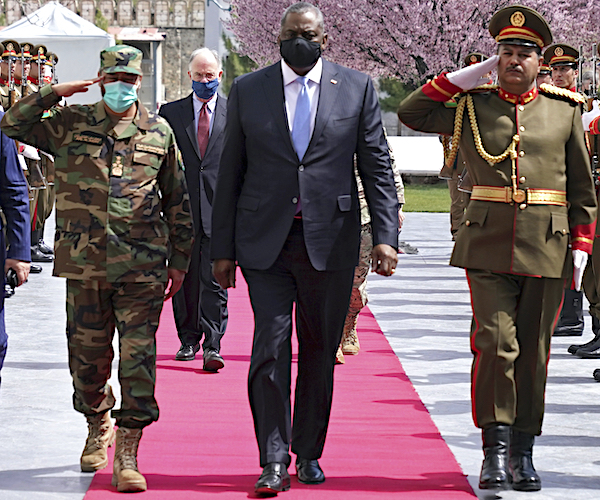 On Friday where he calls for”immediate actions” to weed out”extremist behavior” from the military.

The new orders come after Austin has spoken with advisers and reviewed the results of the Defense Department-wide stand issued in early February.

The memo said,”The vast majority of those who serve in uniform and their civilian colleagues do so with great honor and integrity, but any extremist behavior in the force can have an outsized impact.”

Chief Pentagon spokesman John Kirby reiterated this statement in a news conference Friday, adding, “The vast majority of those serving are not espousing these ideologies. Yet even the few doing so have a corrosive effect.”

The first step is the establishment of a”countering extremism working group” to handle the implementation of”these immediate actions and also work toward intermediate and long-range goals.”

On the Pentagon’s website indicates many service members have”asked for a clear definition of extremism.”

An update will be made to”transitioning instructions” to frighten”those who are leaving the military of the dangers posed by extremist groups.” Kirby noted, “some extremist groups are actively trying to recruit military members who possess leadership abilities, planning expertise and knowledge of weapons that these groups desire.”

Austin has “ordered the services to work closer together and learn best practices from each other to ensure extremists do not get into the ranks.” He’s encouraging the many services to share information regarding potential threats.

Finally, Austin has commissioned a study “on extremist behavior within our Total Force, to include gaining greater fidelity on the scope of the problem.” And this group will meet around April 14 and be given 90 days to submit their “recommendations for medium-range and long-range plans to combat this scourge” to Austin.

“I think the working group wants to look at how well [the services] are interconnected, and how robustly they are sharing information, best practices, to include data collection through partnership with the law enforcement organizations, as well as commanders and supervisors,” Kirby said.

Many on the right have taken issue with Austin’s campaign to root out extremism within the military as being political in nature. As most government agencies have grown hyperpartisan through time, the military has, for the most part, managed to buck that trend.

Austin’s Department of Defense has joined the fight against climate change that the Biden administration considers to be a danger to our national security.

It said, “Climate change presents a growing threat to U.S. national security interests and defense objectives. The changing climate is altering the global security and operating environments, impacting our missions, plans and installations.”

“We will incorporate climate risk analysis into all of our work from installation planning; to modeling, simulation, and war gaming; to the National Defense Strategy and all other relevant strategy, planning, and programming documents and processes including those supporting decision making in the Military Departments.”

“Whether it is increasing platform efficiency to improve freedom of action in contested logistics environments, or deploying new energy solutions to strengthen resilience of key capabilities at installations, our mission objectives are well aligned with our climate goals.”

The Pentagon has also addressed problems of sexism in the armed forces. Austin has issued orders to make women in the military feel more respected and included going so far as to design maternity flight suits.