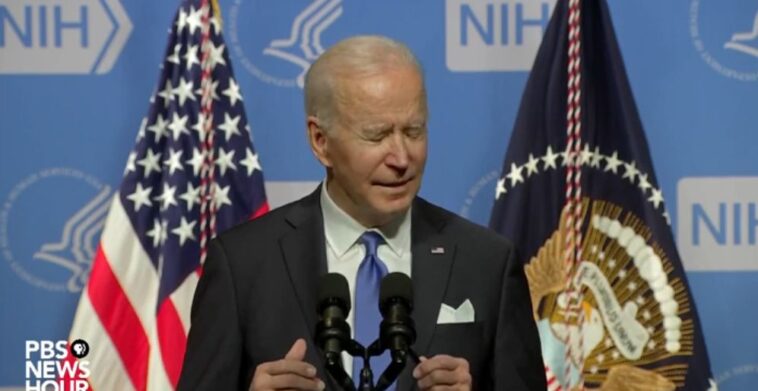 On Thursday, President Joe Biden spoke to the nation about the minor Omicron variant currently being studied and the steps his administration is taking in order to combat it.

While discussing what he called “surge response teams,” Biden repeatedly slurred his words, coughed, and generally sounded out of touch with what is going on.

“These teams work, they provide needed staff — for staff overruns — that is badly needed staff where overrun hospitals are handling more patients than they can handle for their emergency rooms and intensive care units. You don’t have a personnel available to help provide lifesaving treatments in communities in need, like monoclonal antibody treatment?” he said. “We have over twenty teams deployed now.”

“Today I’m announcing that we’re going to triple that, more than double, we’re going to get to 60 teams ready to deploy in states experiencing surge in cases over the course of this winter,” he added. “I was yesterday with the governor in Minnesota who was raving about the positive impact it’s had on his state, but there’s other states the same, the same circumstance.”

“Additionally, we’re increasing the availability of new medications recommended by real doctors, not conspiracy theorists, okay?” he continued. “For example, monoclonal antibody treatments have been shown to reduce the risk of hospitalization by up to 70 percent and — for unvaccinated people at risk of developing severe disease. We’ve already distributed over 3 million courses of this treatment to save lives and reduce the strain on hospitals.”

Even more alarming is the fact that Biden stated he would do “everything in my power” to ensure Covid vaccines are available to children, even though he doesn’t know if they’re safe or if they can stop the spread.

NOW – Biden will do everything in his power to help FDA approve vaccines for children under 5. pic.twitter.com/ZOxE3CYvRb

Over the past twenty months, 70 Covid related deaths have been experienced by children aged one to four. This figure is out of the 6,649 deaths that occurred in this age group. The CDC also states that 95% of the Covid-related deaths occurred in people with severe comorbidities, which is often multiple comorbidities. The survival rate for this age group is estimated at 99.99965%, with approximately 20 million children. You will almost break your calculator if you calculate the survival rate of healthy children. It is 99.99998%.

Biden then joked about the “real” president.

NOW – Biden: "Who's President? Fauci! But all kidding aside…"pic.twitter.com/Jwo7rdDgrQ

“Who’s President? Fauci! But all kidding aside…”

His sense of humor seems almost as bad as his cough. It might be worth his time to have Omicron checked and for a quick psycho eval. His closing remarks were also included at the end.

“Let me close again by saying God bless our doctors, our scientists and all of you here at NIH for what you’re doing for the country and, quite frankly, the world,” he said. “You’re the best, the very, very best. God bless you all. Thank you for your patience in listening to me.”

It is time to inform the president about the dismal approval ratings that indicate that the American people are tired of his failed presidency.