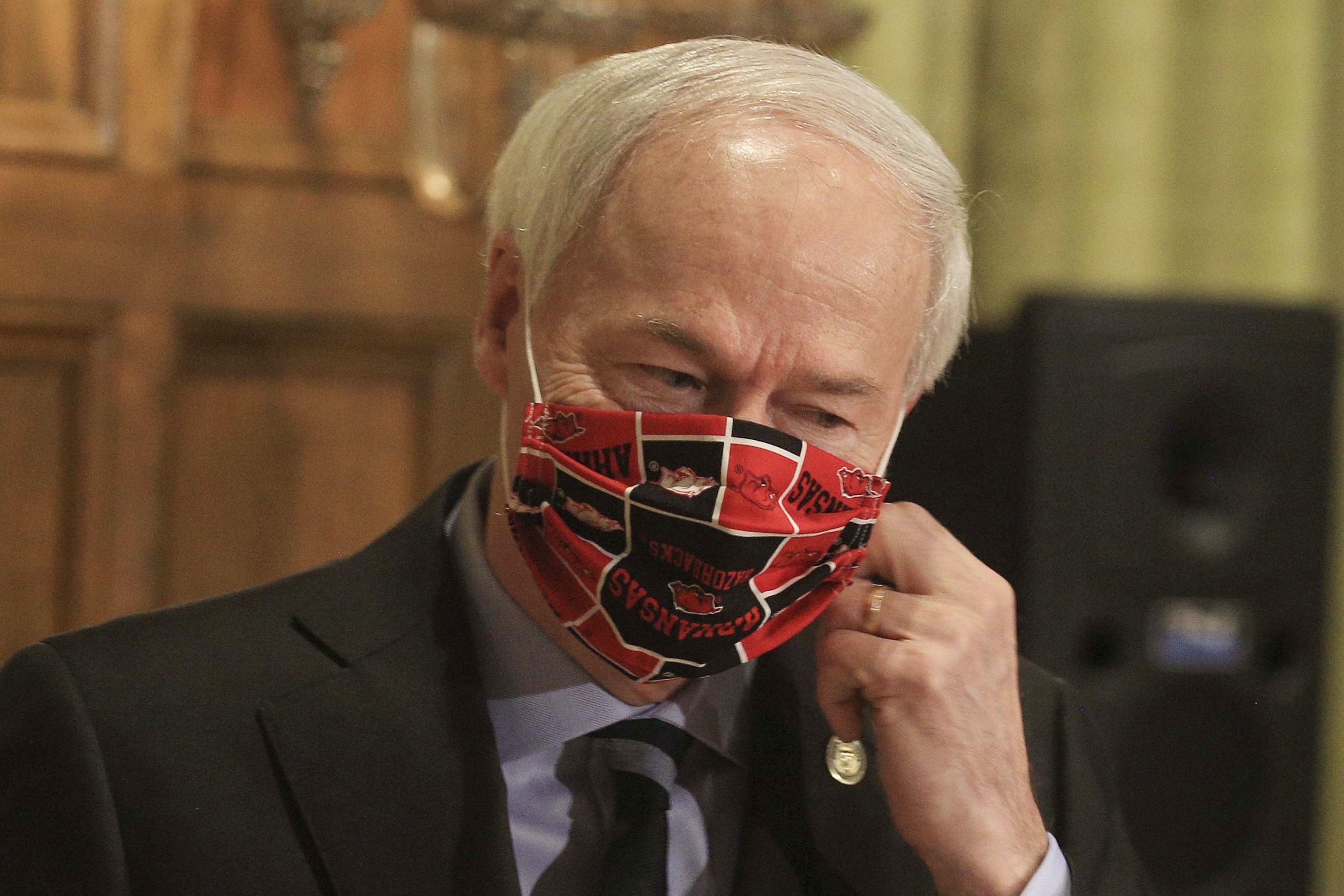 An ardent abortion foe who once opposed allowing gay couples to be foster parents, Arkansas Gov. Asa Hutchinson is the unlikeliest figure to complain about bills on the “culture wars” reaching his desk.

But by vetoing a ban on gender confirming treatments for transgender youth, the Republican offered a rare rebuke to fellow conservatives who have been in overdrive this legislative session with bills expanding gun rights and restricting LGBTQ and abortion rights.

“I was told this week that the nation is looking at Arkansas because I have on my desk another bill passed by the General Assembly that is a product of the cultural war in America,” Hutchinson said as he announced his decision. “I don’t shy away from the battle when it is necessary and defensible, but the most recent action of the General Assembly, while well-intended, is off-course.”

Even for veterans of the culture wars like Hutchinson, this year has been a jarring one in Republican-controlled statehouses from South Carolina to South Dakota. Fueled by an influx of hard-right lawmakers echoing former President Donald Trump and the backing of outside groups, Republican legislatures are pushing the bounds in already deeply Republican states on issues such as gun rights, access to abortions, and increasingly, protections for transgender people.

The bills reflect the larger mood of the Republican Party, which nationally has struggled to define Democrats in the post-Trump era. Instead, the focus has been on issues that drive the party’s base and that Republicans use to portray Democrats as out of touch with average Americans.

“Republicans’ frustration with an inability to move policy at a federal level trickles down to more action in the states,” Republican strategist Alex Conant said. “I think a lot of these state legislatures are responding to the demands of the conservative base, which sees the culture wars headed in the wrong direction nationally.”

Few are going farther to the right than Arkansas, where Hutchinson over the past several weeks has signed bills restricting rights for transgender people, banning almost all abortions in the state, and easing restrictions on the use of deadly force in self-defense in the so-called Stand Your Ground law.

The bills faced little to no resistance in the Legislature.

“The conservative bent of this legislature is just so overwhelming that there’s not any guardrails,” said Sen. Keith Ingram, the top Democrat in Arkansas’ Senate.

Some of the measures Republicans are pushing in the country expand on longtime party priorities. Encouraged by Trump’s three appointments to the Supreme Court, GOP lawmakers have moved beyond incremental abortion restrictions and are instead trying to enact outright bans like Arkansas has. Thirty-one such bans have been proposed in 15 states this year, according to the Guttmacher Institute, a research group that supports abortion rights.

The number of anti-abortion bills being considered in Oklahoma has nearly doubled over the past three years. South Carolina’s Republican governor signed a measure banning nearly all abortions, a measure that was immediately blocked due to a legal challenge.

Hutchinson in February signed a Stand Your Ground law loosening restrictions on the use of deadly force in self defense, a proposal that had stalled in past years. Tennessee Gov. Bill Lee last week signed a law allowing most adults 21 and older to carry handguns without a background check or training.

The new fronts include record numbers of voting restrictions fueled by Trump’s unfounded claims of election fraud in 2020. A sweeping new voting law in Georgia prompted pushback from major corporations and even led to Major League Baseball pulling the All-Star Game out of Atlanta.

The Human Rights Campaign, the nation’s largest LGBTQ rights group, said it’s been alarmed by the record number of bills imposing restrictions on transgender people. More than 100 such bills have been filed so far this year, the group said. At least 20 states are considering treatment bans similar to Arkansas’.

GOP leaders say the bills in some cases reflect lawmakers catching up on sessions cut short last year due to COVID-19, but also constituents’ desires.

“That’s the direction that Tennessee is wanting to move, based on the people they elected,” said Cameron Sexton, the House speaker in Tennessee, where the flood of advancing bills includes an effort to make the Bible the state’s official book.

The agenda for Arkansas’ House and Senate on any given day this year looks like a social conservatives’ dream. Other bills working their way through the Legislature include one allowing schools to teach creationism and one prohibiting police from enforcing federal gun laws.

The flood of bills is even too much for Hutchinson. A longtime figure in the state’s Republican politics, Hutchinson is a former congressman who called for reinstating the state’s ban on gay foster parents when he ran unsuccessfully for governor in 2006. Since taking office in 2015, he’s signed some of the strictest abortion restrictions in the country.

A day after he vetoed the transgender treatment ban, Republican lawmakers overrode him and enacted it anyway. Hutchinson signed the abortion ban despite his concerns about its constitutionality, and lack of the rape and incest exceptions. He signed the Stand Your Ground legislation despite past reservations about changes to the state’s self-defense law.

Conservatives have also dramatically scaled back Hutchinson’s goal of passing a hate crimes bill this year. They’re advancing instead a “class protection” bill that doesn’t refer specifically to categories such as race, sexual orientation or gender identity. The governor has said he supports the measure, though he acknowledges it wasn’t his first choice.

Arkansas Republicans say the bills show the shift farther to the right in the state, which Trump easily won in 2016 and last year. Republicans also expanded their majorities in both chambers of the Arkansas Legislature last year.

“After years of being told, this isn’t what people want, this will hurt us, we’ll lose an election, we’re actually seeing the opposite being true,” Republican Sen. Trent Garner said.

The tone of the debate over the transgender measures is worrying opponents, especially health care professionals who have warned that the steps are marginalizing people already at high risk of bullying and suicide.

At one point during a debate on one of the transgender measures in Arkansas, a Republican lawmaker cited a Bible verse that called people who wear another gender’s clothes an “abomination.” Another compared parental acceptance of transgender youth to allowing a child to decide to become a cow.

“I grew up in a state that I didn’t feel like was legislating hate against me,” said Rep. Tippi McCullough, the top Democrat in the Arkansas House and the only openly gay member of the state Legislature.

Hutchinson’s stance against the treatment ban earned him the ire of Trump, who called the governor a “lightweight RINO,” meaning Republican in name only.

South Dakota Gov. Kristi Noem, a potential 2024 presidential hopeful who’s tried to align herself with Trump, faced similar conservative backlash after reversing course on a transgender sports ban. Noem initially said she planned to sign the measure, then partially vetoed it and later issued an order that pushed schools to issue bans.

Noem has promised to call a special legislative session this year to have lawmakers take up the issue again.

Hutchinson said he doesn’t regret the other transgender restrictions he’s signed and isn’t backing off his support for restricting abortion. But he said he hoped his veto would cause fellow Republicans to consider restraint on some social issues.

“Sometimes you’ve got to pull back and say, is this really the role of the state?” Hutchinson told reporters. “Is this really reflecting confidence in parents and doctors to make good decisions?”

This story has been corrected to reflect that Major League Baseball has moved the All-Star Game, not the World Series, from Atlanta.

Biden Open to Shortening Length of Programs in Spending Bill