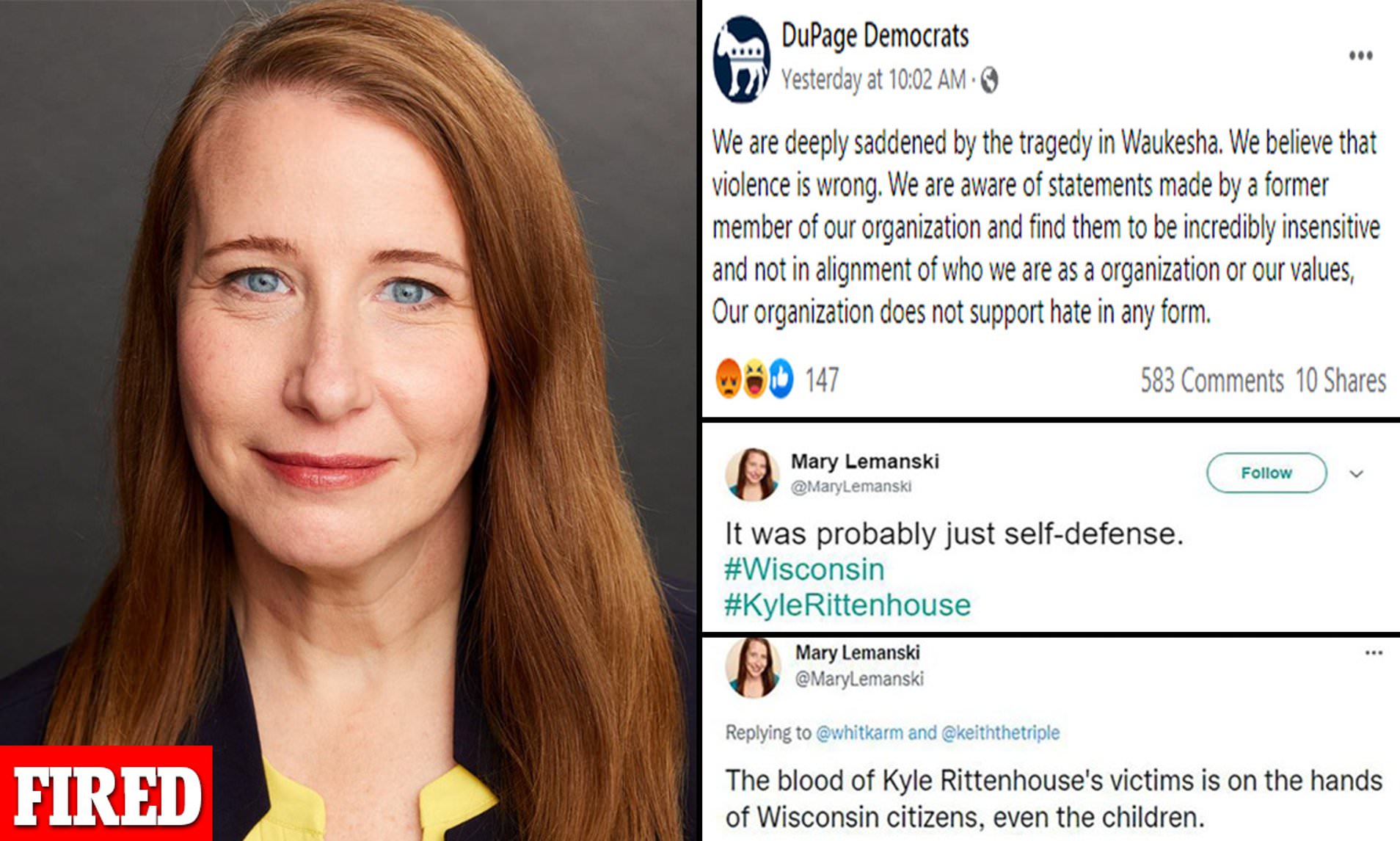 DuPage County Democrats fired the social media director after “callous” and “reprehensible” posts that compared the driver who crashed into a Christmas parade outside Milwaukee, killing five people and injuring 40 others to Kyle Rittenhouse.

“It was probably just self-defense,” Mary Lemanski tweeted Sunday on her personal Twitter account, according to posts republished by Fox News.

“Living in Wisconsin, he probably felt threatened,” Lemanski tweeted about the SUV driver.

These tweets were deleted after Rittenhouse was acquitted of murder in mocking reference to his defense strategy during the Black Lives Matter protests in Kenosha last January. Rittenhouse had killed two men and injured a third.

“I just believe in Karma and this came around quick on the citizens of Wisconsin.’

She also tweeted: “You reap what you sow, Wisconsin.”

Mejia-Beal went on: “She does not speak for us and we unequivocally reject her statements about the tragic events that occurred yesterday in Waukesha. We as a party denounce violence of any kind. Our thoughts and prayers are with the families impacted by this heinous act, which shocked and saddened us all.”

Jim Zay, the chairman of DuPage County Republican said that he was shocked and outraged by the statement of a spokesperson for DuPage County Democratic Party.

Mejia-Beal stated that Lemanski worked part-time as a social media head for many years in a phone interview.

“There really wasn’t a lot said. … She really didn’t explain very much to me at all. There’s not really much to explain,” said Mejia-Beal, who just took over as head of DuPage County’s Democratic Party on Nov. 1.

“We 100% do not agree with the words that she used and it was better for her not to be a part of this organization,” he said.

Lemanski expressed regret over her comments that were “not good taste” in a post to the DuPage Democratic Party Facebook page and stated that she had resigned.

This is not the first time Mejia Bel has called out someone for using inappropriate language.

Mejia Beal, a Black and Gay, called out Republican state Rep. Amy Grant for comments she made during a secretly recorded telephone conversation.

Democrats held a news conference to play parts of her comments at that time.

In one clip, Grant said Mejia-Beal is “just another one of the Cook County people.”

“The only thing we need is another person on the Black Caucus,” Grant said in one clip.