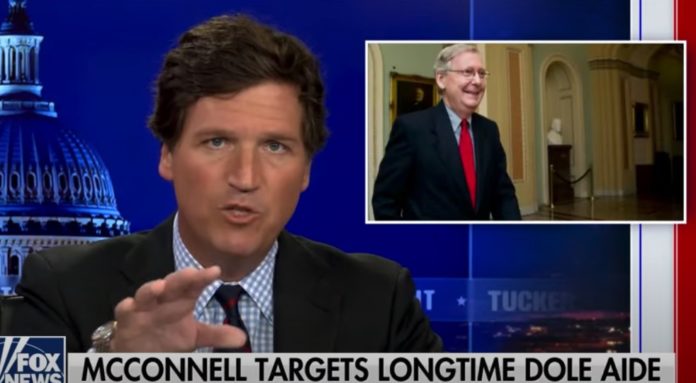 “Mitch McConnell is an instrument of the left and everyone in Washington knows this.” Carlson stated.

McConnell was even involved in the firing of Tim Unes, a long-time GOP event planner. He helped to plan Jan 6th’s peaceful portion.

Carlson started, “Tim Unes was a Republican event planner from Washington.” He has been organizing appearances for Senator Bob Dole’s wife, Senator Elizabeth Dole, for 25 years.

“He was close to the family. When Bob Dole died last week Unes was the obvious choice to manage the funeral and memorial service. He would’ve done that if Mitch McConnell had not gotten personally involved,”  Carlson said.

“There is nothing illegal or immoral about doing that, if anything is constitutionally protected behavior it is organizing a political rally. It is why we have the bill of rights,” Carlson said.

Carlson added “But the partisan lunatics on the Jan 6th committee don’t acknowledge the bill of rights. They objected to this and then Mitch McConnell aggressively took their side as he has from the very beginning. So, McConnell then convinced the Dole family to cancel Tim Unes’ contract and disinvite him from the funeral.”

He continued, “It was crushing the weak on behalf of the strong and for no real reason. Only because he could and that he doesn’t like Trump.”

Carlson claims McConnell’s actions will ensure Unes has no corporate clients, no business, and more income for Time Unes.

“So, even Mitch McConnell’s usual standard of viciousness in Washington, he was known in Washington as the nastiest older woman in town. This was an incredibly cruel act to do.”

It was crushing the weak for the good of the strong, and it did so without any real purpose. He could only do it, and he doesn’t like Trump.”

Technically, Mitch McConnell is the Republican leader in the United States Senate.

But in real life, on the issues that matter, Mitch McConnell is an instrument of the left. pic.twitter.com/EUw8H3OUBT

Illinois Dem Under Investigation for Bribing