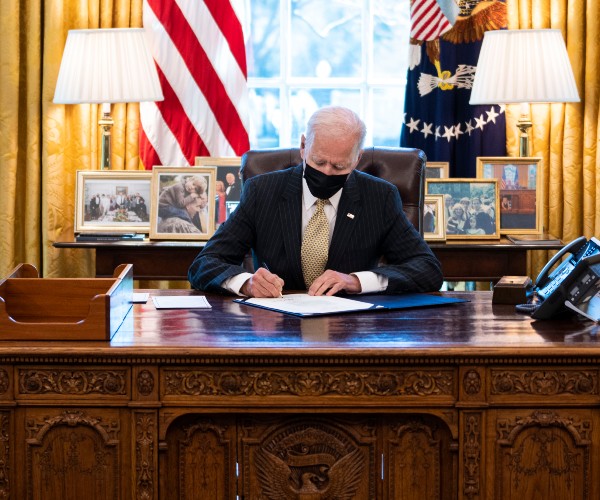 Joe Biden began receiving my compliments here even before he formally declared his candidacy. My praise lasted throughout the eve and in the aftermath of the election. I praised Biden for his instinct for pragmatism and his ability to keep his left-wing mollified without adopting almost all of their most intense propositions.

While disputing a number of his policies, like shutting down Keystone XL pipeline, I chased Biden’s focus on tackling the pandemic and on getting relief to the millions thrown out of work by the government or pandemic measures to contain it.

So perhaps I have standing to call out his”infrastructure package” and its attendant tax hikes as a poison pill. President Biden seems about to succumb to his party’s addiction to tax hikes, stumbling into a political quagmire that will dash his prospects for re-election in addition to crushing Vice President Harris’s aspirations.

President Biden, overrule you advisors, don your scuba equipment, deploy the Oxygen Destroyer! Thwart the monster who would suck all the oxygen out of the financial recovery! Thus, save America as well as yourself!

When you first proposed these taxes:

Democrats have an odd fixation on increasing taxes. In falling for it, Biden has fallen into a political trap.

Raising taxes is unpopular with voters. Dems seem oblivious to that. At the 1984 Democratic Party national convention, nominee Walter Mondale, in his acceptance speech, declaimed:”Mr. Reagan will raise taxes, and so will I. He won’t tell you. I just did.” The audience went wild.

Reporters Jeff Birnbaum and Alan Murray, in Showdown at Gucci Gulch, reported that then:”Dan Rostenkowski, standing next to the candidate in front of the cameras and the cheering crowd at the convention after the fateful speech, whispered to Mondale,’You have got a great deal of b****s, pal.’ According to Rostenkowski, Mondale whispered back,’Look at’em, we are going to tax their a** off.'”

Mondale lost 49 states. He was buried by Reagan in the biggest electoral landslide in history.

Joe Biden is much smarter than his advisors.

U.S. Senator Joe Biden voted in favor of both Reagan tax rate cuts that cut the top tax rate from 70% to 28%!

Now that is bipartisan! The economy soared.

That is not”infrastructure.”  And we voters hate to have those trillions extracted from our pockets, directly or indirectly. We hate to see taxes increased on brackets to which we aspire.

As the ever-sensible Senate minority leader Mitch McConnell (R-Ky) crisply observed, “I don’t think there’s going to be any enthusiasm on our side for a tax increase.”

Do not break bad. Do not raise taxes. There is a better way to get your hands on all that lovely money. Get economic growth up to 4%, yielding, over ten years, more trillions in tax revenue than you and your successor will know what to do with! (Hint: pay down the national debt!) All gain, no pain.

Instead, enhance growth so that we all, from lowly scriveners like me all the way up to Great Big Uncle Sam, Spender of Trillions, can enjoy a rising tide of wealth.

To paraphrase Mr. Mondale, Your advisers will tell you to increase taxes. I say increase economic growth. They won’t tell you. I just did. Abandon your disastrous path toward a whopping tax increase.

Instead, tack toward policies of wealth. Then watch the crowd go wild, handily gliding to a landslide reelection.