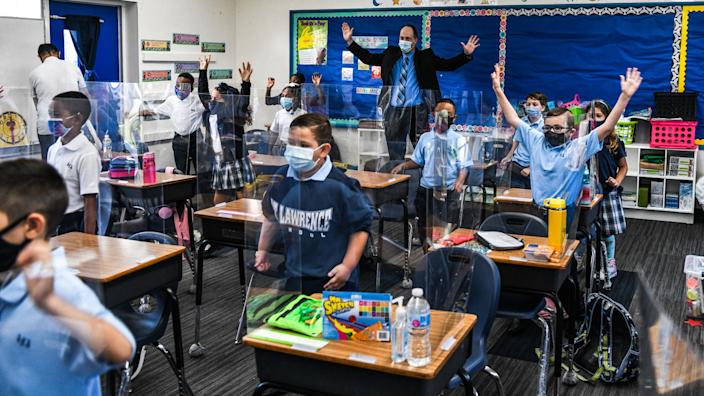 “Some politicians are trying to turn public safety measures — that is, children wearing masks in school — into political disputes for their own political gain,” Biden said, in an obvious reference to Gov. Ron DeSantis of Florida, who has threatened to punish school districts and individual superintendents if they insist on making masks mandatory.  Governor. Greg Abbott, Texas, issued a similar decree. However, it did not include the bitterness that developed between DeSantis and Biden.

Biden stated that they had set a dangerous tone by inciting what many officials consider a culture war and unnecessary violence. He specifically referred to a school board meeting in Williamson County, Tenn., at which raucous anti-mask protesters threatened doctors.

“The intimidation and the threats we are seeing across the country are wrong. They’re unacceptable,” stated the president. He has attempted to calm the culture wars that surround the pandemic. His predecessor, Donald Trump, was happy to inflame them. The Delta variant has made it more difficult, bringing back many of the earlier summer debates.

There has never been a more heated debate than in schools. They want children and adults to wear masks. This is in direct opposition to Republican governors who claim that masking should be a choice and that educators shouldn’t make it mandatory. In both Texas and Florida, which have some of the highest infection rates in the nation, large school districts have defiantly imposed such mandates as schools begin to open.

The Delta virus is more easily transmissible than earlier coronavirus variants, and many more children have been infected and hospitalized. Florida has thousands of infected children, which threatens the orderly reopening schools. DeSantis won widespread praise last year for opening schools when other governors failed to do so due to opposition from teachers’ unions.

Most Democratic governors reached an agreement with unions this year to reopen schools with safety guidelines such as universal masking. DeSantis is being criticized for refusing to mask, this time by unions and supporters.

Last week, the White House said it would try to support districts that are defunded, or superintendents and school board members whose pay is docked, as punishment for imposing mask mandates. Although it is unclear how the Biden administration will do this, one option the president has looked at is to use unspent funds from last winter’s coronavirus relief package.

“I’ll stand with those who do the right thing,” Biden said on Wednesday, just hours after Florida’s state education department moved to investigate a school district that imposed a mask mandate.

Biden also stated that he had instructed Education Secretary Michael Cardona “to take additional steps to protect children.” This includes using all his oversight powers and taking legal action, if necessary, against governors who try to intimidate or block local school officials.

He stated that he would discuss the return to school more in detail next week.

China Sets The Stage For War After Afghanistan Failure