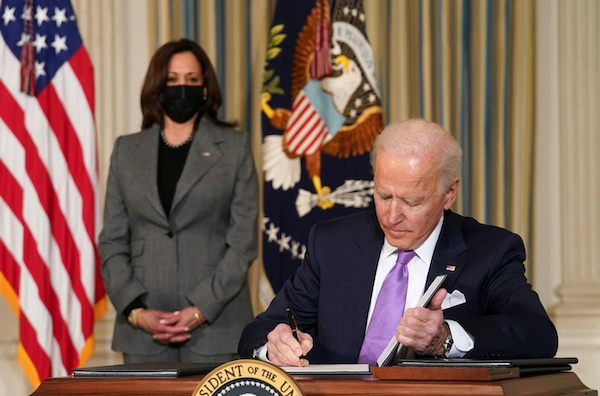 The left-leaning Washington Post criticized the Biden administration’s handling of the southern border crisis on Sunday. It warned Democrats that this could cost them their 2022 elections.

The Post reported that the Biden Administration does not appear to have any strategy for addressing the ongoing crisis at the Border.

“In its apparent desperation to fashion an immigration strategy that will impose order on increasingly out-of-control migration, the Biden administration has unleashed a torrent of words and goals untethered to specific policies and timetables,” the Washington Posts’ editorial board said. “To date, on immigration, officials have effectively reversed and rolled back some of the Trump administration’s most pernicious policies, but without a clear road map to address the immediate crisis — a decades-high surge in illegal border-crossing — or the long-term challenge driving migration: dysfunction, disorder and decay in Central America.”

Back in July, Harris released a five point plan to address “the root causes of migration from El Salvador, Guatemala, and Honduras” that, according to the Daily Wire, “focused on combating economic insecurity, corruption, crime, human rights violations, and other widespread and systemic issues in those countries.”

“That’s fine as far as it goes,” the Post said. “It’s also a list that anyone with a passing knowledge of the region could have compiled. What is mostly missing from the sweeping rhetoric and broad-strokes analysis is an actual plan for action.”

“Ms. Harris and administration officials have also described short-term steps designed to get a handle on deterring the current tsunami of migrants and asylum seekers at the border,” the Post continued. “But the convoluted messaging — telling migrants not to seek entry to the United States while at the same time relaxing or scrapping an array of measures that would actually dissuade them, and providing relief to migrants on both sides of the border — has been a failure.”