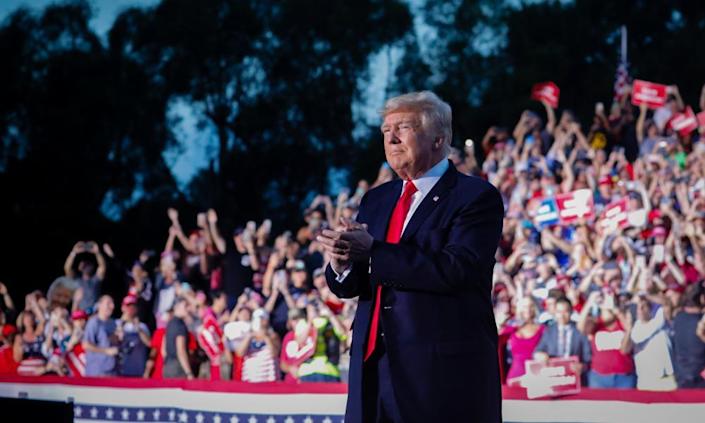 Donald Trump was due to stage a rally in Alabama on Saturday night, in a city that has declared a Covid emergency and in support of a congressman who both backed Trump’s attempt to overturn the election and this week sympathised with a man who threatened to blow up the US Capitol.

In support of Mo Brooks’ bid to be elected US Senator, the former president will speak at Cullman, Alabama.

Like other southern, Republican-run states, Alabama is experiencing an increase in Covid-19 cases due to the contagious Delta variant. Cullman declared an emergency on Thursday.

“We want to prevent as many non-Covid related things as possible, so our hospital can use its resources to focus on the pandemic and its variants,” said Luke Satterfield, an attorney for the city, according to AL.com. “We don’t want to put any extra strain on them.”

In a statement on Saturday, Trump said he expected a “huge crowd and tremendous enthusiasm” as there was “much to discuss, mostly having to do with bringing our country back”.

Dr William Smith, chief medical officer for Cullman Regional, told CBS42: “We view this as a potential ‘super-spreader’ event, just like last week’s Rock the South that was [at the same location]. We have seen an increase of patients since last weekend’s event and we are concerned that we may see the same effect.

Trump’s presence could also cause problems for Brooks’ rivals in the Republican race for the Senate seat that is being vacated due to the retirement Richard Shelby.

In 2017 Trump experienced defeat in Alabama when his chosen candidate, Judge Roy Moore, lost to the Democrat Doug Jones amid allegations of sexual misconduct involving underage girls which he denied. However, Jones was defeated in 2020 and the state is still firmly Republican.

Brooks was a major backer of Trump’s efforts to reverse his clear electoral defeat by Joe Biden. He joined Trump in speaking at a Stop the Steal rally near the White House, just before Trump supporters attacked the US Capitol.