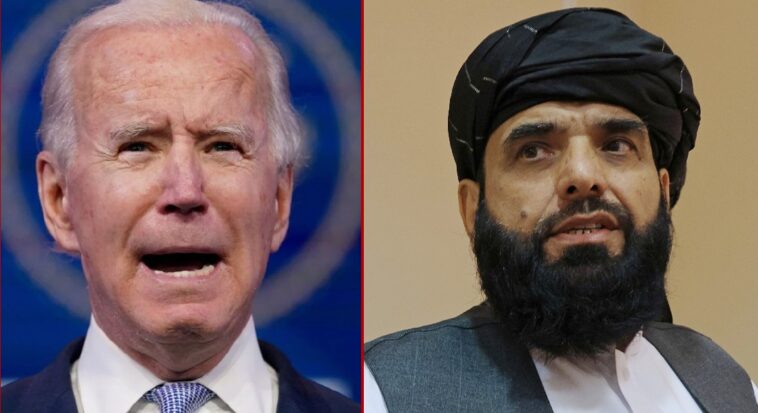 The Taliban rulers in Afghanistan have made it clear to President Joe Biden that American citizens and any attempt to rescue them after August 31 are not welcome.

Biden refused to extend the deadline. The Islamic extremist regime warned of “consequences,” if any attempt to evacuate U.S. citizens was made after that point.

“The Taliban will not agree to an extension of the August 31 deadline for the United States to withdraw troops and a delay will bring consequences,” a spokesman told the news company Sky News.

“You can say it’s a red line,” spokesman Suhail Shaheen said in an interview. “If the US or UK were to seek additional time to continue evacuations — the answer is no. Or there would be consequences.”

Early Monday morning, reports indicated that gunfire broke out at the entrance of the airport. It is not clear what happened during the shooting that occurred at dawn.

The U.S. military and NATO did not immediately acknowledge the shooting, ABC reported. The Taliban did not comment.

The Biden administration was forced to plead for the Taliban to stop harming Americans following the abrupt withdrawal of U.S. military personnel.

Blinken, along with Major Garrett, appeared on Face the Nation on Sunday to discuss how such a disaster could have occurred in U.S. foreign policies.

“The president said that we have an agreement with the Taliban,” Garrett began. “Mr. Secretary, that implies that we are negotiating with them. Does that not already confer upon them legitimacy?”

“No,” Blinken said. “No, we’ve had for a long time contact with the Taliban, both at a political level, in Doha, going back, going back some years, as well as now on the ground, in Kabul, a working relationship in order to de-conflict, in order to work through any problems with people getting to the airport.”

“That’s been very important to making sure that we can actually advance our own interests in getting people out safely, and as effectively as posssible,” Blinken added. “So, that’s the nature of the relationship.”

“Some in our audience might listen to you, Mr. Secretary, and say, ‘Oh, so we have to ask the Taliban’s permission for Americans to leave’.” Garrett said. “True or not true?”

“They, they are in control of Kabul,” Blinken said. “That is the reality. That’s the reality that we have to deal with.”

“How comfortable are you with that, Mr. Secretary?” Garrett asked.

“What I am focused on, what we’re all focused on, is getting people out,” Blinked responded. “And making sure that we are doing everything possible to do that. In this case, it is, I think, a requirement of the job to be in contact with the Taliban that controls Kabul.”

Biden was asked a series of questions about Afghanistan withdrawal. These included his flawed risk assessment that terrorists wouldn’t return to Afghanistan. He also explained why the Biden administration didn’t know how many Americans needed to be evacuated. And how he can ensure that Americans trying to reach Kabul International Airport are safe.

“Why do you continue to trust the Taliban, Mr. President?” a reporter shouted as Biden left the press conference. The question remained unanswered.

But on Sunday, Biden did finally answer that question.

“On the question of the Taliban, do you trust them now?” a reporter asked. “Now that you have to negotiate with them?”

“I don’t trust anybody including you,” Biden said. “I love you but there’s not a lot of people I trust.”

“Look, the Taliban has a, umm,” Biden said before he paused. “Taliban has to make a fundamental decision. Is then Taliban going to attempt to be able to unite and provide for the well-being of Afghanistan, which no one group has ever done?”

“Since the before… for hundreds of years,” he continued. “And if it does, he’s going to need everything from additional help in terms of economic assistance, trade, and a whole range of things.”

“They have told other countries as well as us, they don’t want us to move our diplomatic presence,” Biden added.

“And so, so far, the Taliban has not taking action against U.S. forces,” he said. “So far, they have by and large followed through on what they said in terms of allowing Americans to pass through and the like.”

That’s very reassuring, Mr. Biden. But it looks like the Taliban just put your administration on the clock.

Biden May Have Condemned The World To Chinese Domination