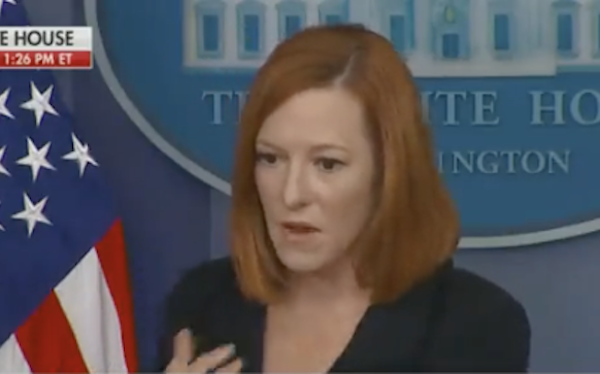 “Following up on the drone strike…” started one reporter. “What was the president’s response when he learned about that?”

“Well the president was briefed uhm, on Friday morning uhm, about the uh the uhm report that was going to be uh released and put out,” Psaki stumbled. “I would at first the presidents uh, view and all of our view is that the loss of any civilian life is a tragedy. Uh as was uh as was made clear in the comments by the secretary of defense uh, by uh, General McKenzie uh, this was done in error uh and clearly uh the investigation that will continue is something that president broadly supports.”

“As a human being uh, as president, as somebody who has uh overseen loss in a variety of uh scenarios both as a leader and personally,” she continued while referring to President Biden’s dead son and daughter. “It is his reaction is that it is a tragedy and uh every loss is a tragedy and he supports the effort to move this forward as quickly as possible and have a thorough investigation.”

Psaki invokes Biden's dead son & daughter as proof he emphasizes w/the families of the Afghans that the U.S. government accidentally droned to death: "As a human being, as a President,. as somebody who has overseen loss…as a leader & personally, his reaction is it's a tragedy" pic.twitter.com/Co3N32s0yY

Psaki wasn’t the only one who had trouble with Monday’s press conference. CNN’s Jeremy Diamond questioned the Biden administration at one point and asked what they were doing to address the many crises that President Biden started.

“And just on the foreign policy front with the U.N. visit tomorrow, President Biden came into office declaring that America is back in vowing to reinvigorate U.S. alliances,” Diamond said. “But in recent weeks, we’ve seen European allies be unsettled by the execution of the U.S. withdrawal from Afghanistan, the administration has admitted to mistakenly killing 10 civilians in this drone strike. And now the U.S.’s oldest ally, France, has recalled its ambassador after being blindsided by this submarine deal with Australia.”

“So my question to you is, how is the President going to restore U.S. credibility at the U.N. this week after all that?” he questioned.

Psaki stated that Biden is focusing on making a case for why the next decade will decide our future, not just for the United States but for the entire global community.

“And he will talk and this will be a central part of his remarks about the importance of re-establishing our alliances after the last several years,” she said. “I also think it’s important to note that re-establishing alliances doesn’t mean that you won’t have disagreements, or you won’t have disagreements about how to approach any particular issue in the world. That is not the bar for having an alliance and important, and partnership. That has never been and it is not currently and his, with the goal of course, of increasing the prospect of security and diminishing the prospect of war.”

“He’ll also make clear that for many of the greatest concerns we have, they cannot be solved or even addressed through the force of arms,” Psaki added. “Whether that is preparing for the next pandemic, something the United States continues to be the global leader on, providing more vaccines to the world than every other country combined. Addressing the threat of climate change as we look, all look ahead to COP26, leveling the economic playing field, fighting for democracy at home and abroad and against threats from cybersecurity, ranging from cybersecurity to emerging technologies and terrorism.”

WOW this question to Jen Psaki from CNN's Jeremy Diamond: "Biden came in to office declaring that America is back, & vowing to reinvigorate U.S. alliances, but in recent weeks, we’ve seen European allies be unsettled…How is the President going to restore U.S. credibility[?]" pic.twitter.com/FkAvTEfUax