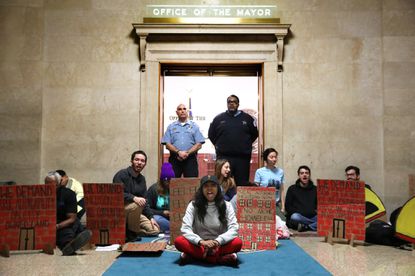 Protesters combined together outside the house of Chicago Mayor Lori Lightfoot to demonstrate their dissatisfaction with her job performance, based on The Daily Wire.

“For the past 2 years, Lightfoot’s administration has continued to ignore the demands of its people.”

“This administration has failed on multiple issues — from environmental justice to education to policing to housing and COVID recovery.”

“Join over 30 organizations in calling out Mayor Lightfoot on her [two-]year anniversary and demand that she fulfill her broken promises.”

Lightfoot said,”By now, you may have heard the news that on the occasion of the two-year anniversary of my inauguration as Mayor of this great City, I will be exclusively providing one-on-one interviews with journalists of color.”

“As a person of color, I have throughout my adult life done everything that I can to fight for diversity and inclusion in every institution that I have been a part of and being Mayor makes me uniquely situated to shine a spotlight on this most important issue.”

“I have been struck since my first day on the campaign trail back in 2018 by the overwhelming whiteness and maleness of Chicago media outlets, editorial boards, the political press corps, and yes, the City Hall press corps specifically.”

Tulsi Gabbard said,”Mayor Lightfoot’s blatant anti-white racism is abhorrent. I call upon President Biden, Kamala Harris, and other leaders of our county–of all races–to join me in calling for Mayor Lightfoot’s resignation. Our leaders must condemn all racism, including anti-white.”