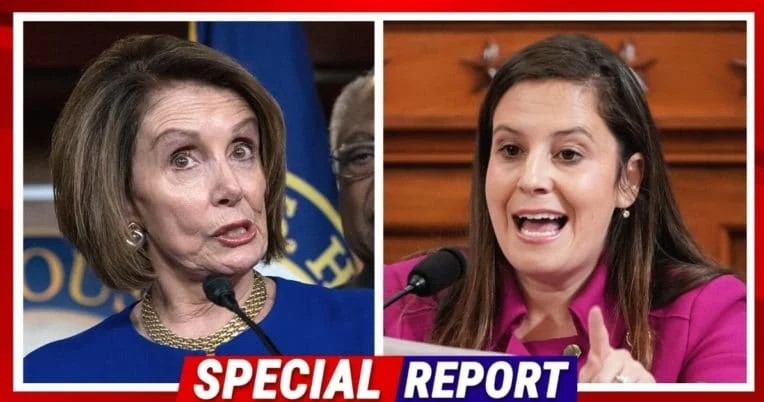 Stefanik was furious at Pelosi’s decision not to allow Republican Reps. Jim Banks (Indiana) and Jim Jordan (Ohio) to serve on the House Select Committee, which aims to investigate the Jan. 6 Capitol Riot.

”Nancy Pelosi is a radical authoritarian Speaker. The Pelosi partisan January 6 commission was never about investigating the facts, it was only ever about Pelosi’s radical politics and the Left’s endless obsession with crushing any discussion or debate,” Stefanik stated in a Twitter statement.

My statement on Speaker Pelosi's authoritarian decision regarding the January 6th commission: pic.twitter.com/DJ2DdXmeJQ

”What is Nancy Pelosi so afraid of? She is afraid of the American people finding out the truth that her failed leadership and the gross mismanagement of the U.S. Capitol led to the tragic events that day,” she continued. ”It is time to Fire Pelosi once and for all. I have no doubt that after the next November, Nancy Pelosi will never, ever hold the Speaker’s gavel again. She will make history as the most despised Speaker of the House who will be fired not once, but twice. And it can’t come soon enough.”

Republican Minority Leader Kevin McCarthy, who initially appointed Banks and Jordan with three other Republicans, has since responded by pulling all five GOP nominees out of the committee, calling Pelosi’s move “an egregious abuse of power.”

”Unless Speaker Pelosi reverses course and seats all five Republican nominees, Republicans will not be party to their sham process and will instead pursue our own investigation of the facts,” McCarthy said in a statement.

Pelosi did not fully explain her reasoning behind blocking Banks and Jordan, in particular. Both Republicans had voted to object to the 2020 election result,  but so did another GOP appointee, Texas Rep. Troy Nehls.

”With respect for the integrity of the investigation, with an insistence on the truth and with concern about statements made and actions taken by these Members, I must reject the recommendations of Reps. Banks and Jordan to the Select Committee. The unprecedented nature of January 6th demands this unprecedented decision,” Pelosi said in a statement announcing her decision.

The July 27th meeting is the first scheduled.